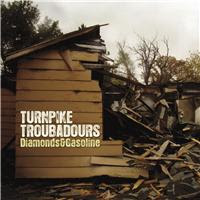 The Turnpike Troubadours are a country outfit out of Oklahoma with a huge following across red dirt country. In fact, their album Diamonds and Gasoline won the Lone Star Music Award for best album of 2010. I mentioned on Twitter that I'd never heard the band, and @kelliegaston quickly remedied that. She hooked me up with a CD for myself and an extra one.

The Turnpike Troubadours have a laid back sound reminiscent of early Reckless Kelly and Steve Earle's more mellow work. It's an unpretentiously catchy album that sounds great in the car with the windows rolled down. If you want hipness-factor, alt-country's gritty defiance or the pop-ness of the current Nashville sound, you don't want this… otherwise, it's for you.

Good news: That extra CD is going to one of you! Just tell me your favorite musical troubadour in this post's comments, on Twitter or on Facebook, and I'll choose one entry to receive the album. It's that easy!
The latest nonsense from Trailer at 4:00 PM