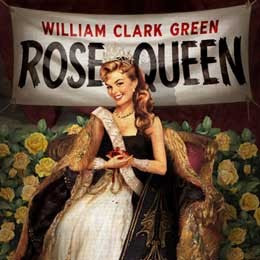 William Clark Green has quickly ascended the Texas/Red Dirt scene in recent months, and for good reason. He has a warm, weary voice and amiable songs that bridge the gap between twangy barroom rock and dusty Americana. It's an approachable sound that has appeal to both casual listeners and folks like me, who want a little something deeper.

Rose Queen, Green's third album, proves the still young artist one to watch for the foreseeable future. Hitting the airwaves with equal parts radio-ready tunes and darker journeys (sometimes in the same song), it is a release that shows both arrival and massive upside.

The title track is a heartland rocker that explores the short-lived relationship between a regular Joe and a country club girl. It's drenched in fast-burning passion and the resignation that there was no chance in hell of it lasting. Mellencamp made millions doing this kind of song; Green should at least get a touring bus out of the deal.

"She Likes the Beatles" is the most commercial sounding tune in the bunch. She likes the Beatles, he likes the Stones, but they make it work somehow. It explores the contrasts that keep a good relationship strong, even if their respective sets of parents hate the other set's half of the couple. It's probably the song that could make the most impact nationally, but there's likely too much personality and realism in the song for Nashville to give it a second glance.

"Drowning" is the literal and emotional center of Rose Queen. Backed by stunning vocals from producer(!) Rachel Loy, it's a stark and beautiful stroll along the edges of a broken love affair.

My favorite track on the record is "Take Me Away." "If you take me away from here/I will make a promise I will never keep" sings Green in this raw, emotionally bare song that veers away from country into almost a mainstream rock sound. The dark, confessing tone of this song proves itself a theme by this point in the album, a surprising thread to tie together such a charming set of songs.


Rose Queen immediately proves William Clark Green ready for the spotlight. He's an artist worthy of running in the circles of the critically and popularly acclaimed Turnpike Troubadours and Departeds of the world. What's scary is that Green probably hasn't reached his creative peak yet. Rose Queen is both promise realized and the declaration of so much more to come.

----
Rose Queen can be previewed/purchased at Amazon, Lone Star Music and the other usual outlets.