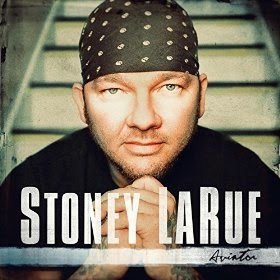 The new Stoney LaRue album, Aviators, is out & critical reaction has been a mixed bag, from what I've seen. To all those who've not been favorable to the album I'd like to say: give it another listen after you read this.

I've always liked Stoney, but he was never a huge favorite. This album changes that for me.

This is a concept album, make no mistake. Plenty of artists have made "divorce" albums before. Some have been good, a few have even been great. This one is the most brutally honest thing I've heard in years.

Basically, Stoney lays out the blueprint, the big picture as it were. From there we hear Stoney document every stage of his grief, try to put himself in his spouses shoes & say goodbye to the future he thought existed, all in the poetic lyrical style, laid back vocals & beautifully layered instrumentation we came to expect starting with Velvet. (Hats off to collaborator Mando Saenz.)

This album needs to be listened to in full, as intended. "Still Running" is a good starting place if you must buy a single, but listen to it as an album. Please.


I also highly recommend the album, as does SCM's Triggerman. I personally haven't read any negative reviews, but I've seen several 'disappointed' comments from fans. It's a pretty melancholy album, but it's not boring... the melodies are subtle... the kind of subtlety that becomes unexpectedly powerful after a few listens. It's an emotional and mature record that peels back the artist and shows the real man. Give it a shot! -Trailer
The latest nonsense from Farcer at 3:00 PM