How to Know Summer is Here 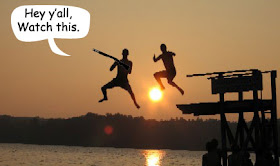 How to Know Summer is Here

Kid Rock is being played on every format. (Except rock and rap)

Green Peace begins lecturing all new recruits on not rolling Gary Levox back into
the water if he's encountered on the beach.

The amount of nighttime that Scott Borchetta has for feeding is reduced significantly.

Trailer starts bitching about his yard needing mowed instead
of Mississippi State having a horrible season.

Country Rap King Mikel Knight decreases the days between showers for his street teams to 7.

Leann Rimes blends in with everyone else.

You go to a big drunk redneck fight and a country music festival breaks out.

Calm down Trailer. We get it, mowing sucks.