Please welcome writer Robert Dean, formerly of Moonrunners, to FTM as a reviewer! He's got a writing itch and nowhere to scratch it, so we're gonna let him review whatever the hell he wants to on here. Metal, post-rock, country, instrumental... it's all fine with me. Lend him a few minutes and an ear and you might just discover something you had no idea you'd love. 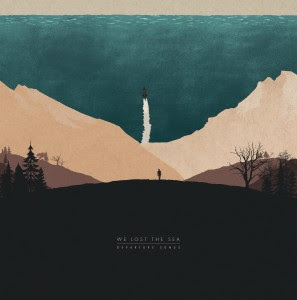 We Lost the Sea - Departure Songs
A review by Robert Dean

I’m gonna be honest, when it comes to instrumental stuff, I typically hear it as background noise. Very rarely does an instrumental record affect like, say an incredible rock and roll band, or even some seriously filthy southern hip hop. I got issues with all kinds of shit, and I get weird and picky when it comes to music in my old man life cycle known as 34 years old. So whateves.

That’s not to say finding an instrumental that blows my socks off doesn’t happen, though. I’m a big fan of Pelican (fucking Australasia, amirite?!), and I’ve been known enjoy some Don Caballero in my day.  I enjoy the monolith depression of Neurosis, and I like Today is The Day because I like wearing all black and sport a beard.

But, with We Lost The Sea’s Departure Songs, I was in for an entirely different experience. I know it’s my job as a music critic, or more appropriately “dude who likes to write about records” to explain what a record means, or how it feels with a lot of lush words, and overly used adjectives. While I totally agree with you, I’m struggling to explain the thought process that I’m trying to string together to convey my gratitude for Departure Songs.

We Lost The Sea are some rad dudes from Sydney, who are that classic case of liking rad music, playing it, but allowing for that unique Australian isolation creep into their sound. I mean, they’re not rocking the didgeridoo or anything, but there’s a certain level of non-American non-pompousness that’s omnipresent and it’s glorious. Cuz, let’s be honest – a bunch of dudes from the States or London are perfectly capable of creating something beautiful one moment, but then fucking it way up the next – to epic proportions. This record needed to be made in Australia to earn its tiger stripes.

Instead, Departure Songs is like a coloring book of emotions. The songs aren’t these crushing riff monsters or intricate Radiohead knockoffs; rather they’re a layer cake of feelings, thoughts and patience for those moments that if you play music, you know you’ve heard the proverbial “it” all musicians chase.

The songs on the record are bleak, dark, but aren’t depressing. They kind of feel like when you’re alone in your car singing Adele: super happy coupled with super sad, but singing those words makes you feel human because it’s relatable to your experience. We Lost The Sea manage to pull this feat off, but with chorus chants, multiple guitars, and buildups that leave you breathless – and done with no vocals.

On the record’s first track, A Gallant Gentleman, it’s the perfect showcase of what the band is capable of; it’s tragic and sets the mood for the record immediately. Not to be outdone by the magnificent artwork of Departure Songs, A Gallant Gentleman feels as if you’re walking along the bottom of the ocean, invisible to life moving along at its own speed. The wildlife swims past you, and you’re walking toward the unknown. Above, if you crane your neck just right, you’ll see the brightness above, but will you reach the top in your lifetime? These are the barrage of mental images. We Lost The Sea create with their songs.

Each track on Departure Songs was crafted with the idea of an over-arching story that spans human existence. Influenced by the failures of mankind, there’s a sense of calm, but married to honest panic due to our existential nature as apes driving cars while creating religions that kill people. It’s all here, and it’s all scarred into these songs.

Departure Songs isn’t an album that will knock you over immediately like say a sweet Slayer riff from back in 1492 because it doesn’t need to be. Instead, it’s a story that sucks you in a la Tom Waits. In songs like Challenger I & II, you’re tempted to explore the world without a seatbelt, daring the cosmos to fuck with you because in your headphones is your challenge to achieve something beautiful.

If these songs are any indication of that lack of fear and total commitment to the heart, you should pay a service to your record player and invest in a copy of vinyl Departure Songs because it will undoubtedly become a cornerstone in your collection for decades to come.

Check out their music here: https://welostthesea.bandcamp.com
And pick up the newly released American vinyl this week: http://translationlossrecords.bigcartel.com/product/we-lost-the-sea-departure-songs-2xlp-preorder
The latest nonsense from Farcer at 10:30 AM