Album Review / Will Kimbrough / I Like It Down Here 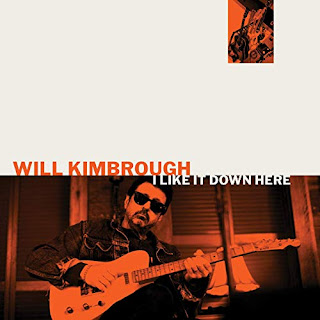 If you were to sit down with Will Kimbrough’s new album & simply glance over the track listing, you could surmise that this is a record of place. Titles like, “I Like It Down Here,” “Alabama (For Michael Donald),” and “When I Get to Memphis” make it abundantly clear that this album is going to be dealing in mostly southern matters.

The ever-consummate sideman, Kimbrough’s years of music with artists such as Rodney Crowell, Emmylou Harris, and Todd Snider are probably impossible not to mention. He’s done solo work, been in groups, written songs for others, produced albums for others, and more. But on I Like It Down Here, we find Kimbrough returning to a very natural version of himself and to a very familiar place, both geographically and emotionally.

The American south is full of things we all love—good music, good food, and good people. This beautiful trifecta is also riddled with bullets of extreme racism, crooked politics, and bad people. Unsurprisingly, Kimbrough’s album echoes these ideas throughout. The lead-off track, “Hey Trouble” is a minor groove about a man lost and, invariably, in trouble. With trouble as his companion throughout the journey, Kimbrough speaks in vaguely heartbroken blues lyrics about the lonesomeness and longing that accompanies a woman gone. If I wanted to wax poetic (or political), I’d tell you that the woman is a metaphor for hope—and that the man left behind is our country, having to deal with the hostile climate we find ourselves in today.

The most interesting lyrical content is delivered in the title track—a greasy creeper about a couple of trashy characters who, unmistakably enjoy their lives in the south. Rife with imagery and language that could be foreign to someone not from down there, the song and message sit in stark contrast to the following track, “Alabama (For Michael Donald)’—a gruesome recounting of the 1981 lynching of a young black man in Mobile, Alabama. These two songs not only define the album, but also the double-edged sword that many from the south have to lay down upon when speaking about where they’re from.

The rest of the album bounces around quite a bit, but has something for most tastes. “I’m Not Running Away” is a jangly pop anthem about getting away from it all; “Salt Water & Sand” is a lilting ode to the gulf shores, and “Anything Helps” is a mid-tempo jaunt about homelessness.

Lyrically, the album has some bright spots of quirkiness (“I Like It Down Here,” “It’s A Sin”) but is mostly comprised of classic blues-based phrasing and generality—in my opinion, on purpose. Musically, Kimbrough is s fantastic producer and played a myriad of instruments on the album. The songs, though many may be sparse instrumentally, are tightly arranged and well-executed. There’s no over-playing, just tasty riffs and licks—which brings me back to southern food.

This is an easy afternoon record. If you’ve got nothing to do, put it on and shuck some oysters, stew over a pot of dark gumbo, or crack a beer next to the barbecue pit and you too can ponder where you’re from and what that might mean to you.

I Like it Down Here is available now on Amazon, iTunes, and pretty much everywhere you like to consume music.