A Conversation With Caleb Caudle

Caleb Caudle wanted an earthy, funky sound for his new album. He assembled several Grammy-winning musicians to chase it down in the Cash Cabin, a small place with a big history. “It feels like you’re in the shadow of giants,” Caudle says.
He emerged from the shadows with Better Hurry Up, his eighth studio album. Its 11 songs showcase Caudle’s vivid lyrics and foreboding vocals, as well as the work of an A-list cast of musicians. John Jackson of the Jayhawks produced, and guest vocalists include Courtney Marie Andrews, Elizabeth Cook, Gary Louris, and John Paul White.
A large sound emerged from the little cabin, which Johnny Cash built in 1979 as a private sanctuary near his home outside Nashville. It evolved into a recording studio more than a decade later. Since then the rustic structure has hosted sessions by everyone from Loretta Lynn and Emmylou Harris to Jamey Johnson and Todd Snider, as well as Cash’s own work on his acclaimed series of American Recordings. Caudle and Jackson used the space to create a dramatic, compelling record.
We caught up with Caudle a few weeks back and talked about recording in such an iconic venue, how the band came together, and some unintentional irony in song titles. 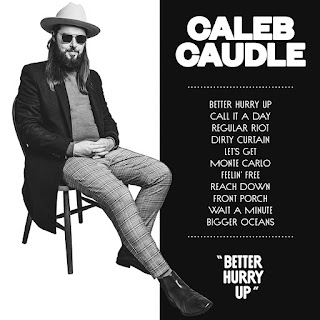 I thought Crushed Coins was one of the great albums of 2018. There’s stark contrast between it and Better Hurry Up. Could you describe your thought process or approach …maybe your goals for a new/different sound as you set out to make this album?

I think the main difference was that this time I wanted to do as much live as I could: sing it live, play it live. Because that’s what I do every night. The approach was so raw that if you don’t like this record, you probably don’t like what I do every night. I came to terms with that and was fine with it, so…yeah. We just did it live. It felt good.

John Jackson of the Jayhawks produced the album, and his bandmate Gary Louris is one of several outstanding artists singing harmony vocals. What’s the connection with Jackson, and was your choosing him to produce based on his penchant for a particular sound?

He came to see me at a show in New York. He came up to the merch table afterwards and introduced himself, saying he had played with the Jayhawks. I had always loved the Jayhawks, so that was really cool. And we got to be friends, sharing music back and forth whether it was mine or whatever each of us was listening to at the time.

At some point he said, “Hey, would you mind sending me some demos, because I know you’re always writing?” So I just started sending him song after song, and we’d talk about each one: what he thought of it, what should be the focus of a particular song. One thing led to another and I was back in New York and at dinner he asked if he could produce the record. It just felt right; I liked his vibe and how he was really in tune with the songwriting. We pitched around some different studios, and he mentioned that he had worked at Cash’s Cabin – I think on a Loretta Lynn album. He suggested that, and I thought it felt perfect.

Y’all made liberal use of keyboards and pedal steel, which gives the whole album an ethereal, spacy feel. Was that something you set out to do ahead of time, or was it more of an organic thing during the arrangement process?

It was pretty spontaneous. Because what we did this time was hire all these people that I really trusted. I wasn’t given a ton of direction. Because you’re not gonna tell, for example, Mickey Raphael [harmonica] what to do; because he’s just gonna do his thing and be himself, and that’s what you’re looking for in the first place. Know what I mean? Because he’s gonna give it back to you better than you could ever ask for it.

Everything was just organic. I just told people to be themselves and do what they thought was right. They were all such high-caliber musicians that it all fell together really nicely.

Who put the band together for recording?

John and I had equal say when it came to the band. I had met Dennis Crouch [bass] – we had done a few demos together a few months before recording. And he just knows everyone in Nashville; he put me in touch with Fred Eltringham [drums] and Russ Pahl, who plays pedal steel. John knew Pat Sansone [keyboards] from Wilco and brought him in. And all the singers who were on the record, I had toured with the previous year. You know how it goes in this business; you meet everybody if you tour long enough.

It just came together naturally, and the record was really an easy one to make. By far the easiest record I’ve ever made.

Speaking of harmony vocals, one could do worse than Elizabeth Cook…

She makes three appearances I believe. Had y’all worked together before, and how likely are future collaborations?

She had taken me out on tour a couple times last year, so we were on stage singing together a lot. So, yeah, it came together really easily. She lives around the corner from us here in Nashville. She was great, of course.

There’s a line in “Feeling Free:” “It’s true I really ever only wanted to be a slave to things that’ll set me free.” Is that an allusion to anything particular?

Probably the road, you know? Touring. I’m really feeling it right now, you know, because of all the shows getting swiped. I’m so used to being on the road. Being on tour is second nature for me. Most of that song, though, is about being outdoors and trying to get away from it all. But I feel like I’m always on the chase; always trying to get to the next situation.

The first cut on the album is called “Better Hurry Up.” The next-to-last song is “Wait a Minute,” with a line in the chorus that says, “We get there when we get there.” Mixed messages? Irony? Tongue in cheek?

Ha! I didn’t even really know I did that until we were mixing the record. I said, “Oh, I wrote one called ‘Wait a Minute’ and one called ‘Better Hurry Up. I wonder if patience had anything to do with that?” It wasn’t really intentional, but it is kind of funny. Our whole routine on tour is a bunch of hurry up and wait. You just have to figure out when to take your shots, I guess.

The official release date for Better Hurry Up was April 3, not long after this virus changed everyone’s life. Obviously, tours are off the table indefinitely; what are some of the things you’re doing to adapt? And is there any reason for optimism going forward, in your view?

Aw, man. There’s always a reason for optimism, you know? If I lost hope, this would all be for nothing. I can’t go there; I don’t want to do that.

I’ve been going on long walks each day that the weather allows. There’s a nice park not far from our house…I’ve been doing some guitar work, learning some old traditional stuff. I’m just trying to learn. And I’ve been writing a bunch, too. Working on some clawhammer banjo here and there. Cooking. Eating a lot. [Laughs]

A lot of artists are streaming shows; have you dipped your toe in that at all?

Yeah, I did one for NPR last week and I did one for Wide Open Country yesterday. I’m trying not to do more than one a week. I just feel like everyone is going live all the time. And it’s how everyone’s getting by, so I totally get it. I just don’t want to take up too much space, so about once a week is all I’ll do.

What led you to record at the Cash Cabin? Is that a bucket-list thing for Nashville artists?

It was amazing. I got to sit in Johnny’s rocking chair while playing his guitar. The guys all gathered around me in a semi-circle with their pens and paper. I’d play them a song and they’d take their notes and we’d go in and run it once. Then we’d hit “record” on the second one and that’s usually the take we did.

Wow. What an experience.

Yeah. I knew we were going to Cash Cabin but had no idea I was going to get to do that. They handed me his guitar on the first day and I was blown away by that. It was a pre-War Martin for one thing; whether it belonged to someone famous or not, it’s an incredible guitar. But when it belonged to such a character as Johnny…and sitting in his rocking chair where he’d carved his initials in the right arm? Yeah, it was pretty special.