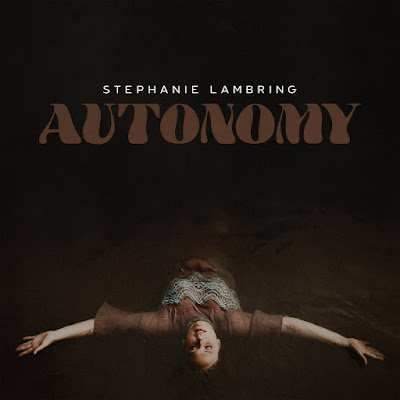 "Everything is a little less worse when someone sees you like a person.” This line from the eighth track of Stephanie Lambring’s debut album tells the record’s whole story. Appropriately titled Autonomy, the album is defined by a sense of independence, the right of Lambring and her characters to tell their own unique stories and the acceptance of responsibility for their own actions and opinions. Lambring gives a voice to the downtrodden and forgotten throughout this record, the least of these who rarely see their stories told, even in country and Americana music where heartache and loneliness can be eased by a mournful melody and the knowledge that someone else has endured the same pain. These are the tales of outcasts, of the misunderstood and ignored, of those who long to just be seen as people. Stephanie Lambring sees them, and she has arrived to empathize with them and show compassion, and through her words, to help us see them also.

Empathy is what sets this album apart and makes these songs resonate. Social commentary in music only works if the artist can not only look out at the world, but can also see within and be vulnerable. Lambring gets this exactly right by opening the album with her most personal songs, describing her shortcomings in detail on “Daddy’s Disappointment” and singing the painful story of her lifelong desire to be "pretty” on the track of the same name. “Pretty” reflects a struggle that so many women and girls go through and never completely get over, and this song does a great job of sending an encouraging message without resorting to empty platitudes and clichés about how we are all perfect.

Even when she’s not telling her own story, Lambring’s relentless attention to detail brings these characters to life and provides vivid illustrations. In “Mr. Wonderful,” she expertly explains how a woman can get caught up in an abusive relationship, from the beginning where she’s swept off her feet to the times he makes her feel guilty for wanting a night out with friends to the troubling dream she’s been having in which she’s on the couch with his hand over her mouth. Everything is a gradual process, until the woman is trapped in a reality she can’t escape and left wondering whether she’s partly to blame. On “Birdsong Hollow,” Lambring documents the last moments of a man’s life before he commits suicide, even down to him taking out the recycling. There is neither judgment of his decision nor of the parents who lost him, just a quiet reflection to remind us of the internal struggles faced by those around us which we often overlook. “Old Folks Home” might be the most heartbreakingly beautiful song here, as we learn about three residents who came here for different reasons, all feeling lost and forgotten by the world. Now they are alone in “God’s waiting room,” as people all around them keep asking when they’ll get to go home and then eventually stop asking when they realize the awful truth. It is here where that defining lyric of the record is found, where Lambring expresses their common desire to just be treated like people once again.

For all the heartbreak, however, somehow there is hope in these stories. Albums like this one can sometimes be a depressing listen and beg for a moment of levity. And indeed, “Fine” does add a lighter touch to this project to counter this concern. But even aside from this, the album is far from depressing. It is less about the circumstances of these characters and more about the fact that Stephanie Lambring recognizes them as people and values their stories, and as she so eloquently puts it, this makes everything a little less worse.

It’s that intangible desire for autonomy which makes this record universal and compelling. Maybe we have never been sent to a camp to correct our behavior like the gay teenager in “Joy of Jesus.” Maybe we have never been left in a nursing home and stripped of our dignity. Maybe we have never known what it is to be  trapped in the bonds of an abusive relationship. But we all share the same need and desire to be seen as people, and too often we lose sight of this when it comes to others. Stephanie Lambring gives us a gentle reminder here through her songs and challenges us all to live with a little more love and understanding in our hearts.