And Exchange it Some Day for a Crown: A Conversation with Brent Cobb

One of my favorite political/theological commentators recently joked that modern Evangelical services consist of “a Coldplay concert and a Ted talk.” As the sage Homer Simpson once observed of every good joke, “It’s funny because it’s true.” Put another way, as a former pastor of mine once said, “Music in most Baptist churches now follow the ‘747’ model: Seven verses, sung 47 times each.”

I’m a “get off my lawn” Southern Baptist, and defiantly proud of it. And that’s why I love Brent Cobb’s And Now, Let’s Turn To Page…, his love letter to his, my and your youth, provided like him and me, you knew what it meant to be in church twice on Sundays plus Wednesday nights.

Esoteric? Sure. This may not be your thing, if you’re not from the Deep South. But for authentic country music fans of a certain bent – and Cobb gets his “country” honest – this album will move you viscerally. It’s been a good while since I could “have church” just by listening to a record, but Cobb has made a joyful noise in such an authentic way. It’s time to spread the good news.

In late November, we caught up with our fellow Georgian to talk faith, hymns, coincidences (spoiler: they don’t exist,) and meeting destiny at a clogging great aunt’s funeral.

About four years, best I can tell.

Yeah. Let’s do this!

This is the first “new” album I’ve listened to where I knew 90 percent of the lyrics ahead of time and found myself singing along involuntarily. A gospel record was on your checklist for a while, but something happened to move it up on the schedule. How about you let folks in on that?

Aight. Well, first of all, we’ve gotta make sure that it’s known as a Southern gospel album. (Laughs) I grew up with Southern gospel, and I grew up in Antioch Baptist Church, where we sang all of those songs. Of course back then it was just with piano and congregation. But I always had it in the back of my mind that that I would do a gospel record, because all my heroes did it: Johnny Cash, Elvis…Willie Nelson still closes out his shows with gospel songs.

But then last year, my son and I got T-boned at this little intersection, a four-way stop I’ve been going through my whole life – on the way to my grandparents’ house. And it’s really rural, a lot of Chinaberry trees, plus it’s in July so everything’s in bloom. And I did my best to look, but it was timed so this guy in a little Honda Civic was in my blind spot. He’s not from the area and didn’t see the stop sign, so he hit me full-on.

My son was right behind me, and we got hit on the driver’s side of the truck. He was okay; I broke my collarbone. So that accident really hurried the making of a Southern gospel album along.

And here’s what crazy about that story, too, that sort of relates: The first thing that I found when I was cleaning out my truck after the wreck was a Rosary that a priest had given me years ago on a Jamey Johnson tour. The necklace was slung way up on the other corner of the dashboard, and I found the cross between my seat and my son’s. But that whole situation’s what made me go ahead and record this album.

By my Baptist count, there’s just one “invitation hymn” on the record, “Softly and Tenderly.” I imagine we’ve both sat (stood, more accurately) through altar calls set to this hymn – and others – that cycled through all the verses multiple times….

“…if anybody’s feelin’ it in their heart today, come on down.”

…exactly! That said, now seems a good time to ask about when you “walked the aisle.”

I was young when I walked the aisle. I was ten years old when I got baptized. It’s funny you ask about that. We played a show down here Saturday, and one of the guys I got baptized with, his daughter was at the show and we talked about that.

When you’re young, you don’t really know about the world, but I just thought Jesus was really cool. The kids I grew up with, we went to Royal Ambassadors and all the different activities. In fact, when I was little – before I started sinning when I was about 16 or 17  – I thought I might want to be a preacher. Obviously, I didn’t go down that path. But yeah, I got saved and walked the aisle when I was ten.

Is this album more spiritual than nostalgic to you? The other way around, or a bit of both?

It’s definitely both. It’s what I grew up with, as I was saying. But I sing these songs…I think I sing them better than I sing my own songs. I think it makes you sing different. My grandaddy, he led the singing at our church, but he wasn’t really a singer. But when he got up there to lead the songs, he could sing. I guess it was because he was singing those songs. And it’s the same way for me. I don’t try to push my beliefs on anybody, but it’s definitely spiritual on a personal level. But also nostalgic.

As we were setting up this interview, I mentioned that when my grandaddy died in 2000, my cousin and I sang “The Old Rugged Cross” at his funeral, and that it was fifteen years or so before I heard that hymn sung in a church house. You said that you’d had a similar experience that we could talk about. Now’s the time.

I actually have two stories about that.

My grandaddy’s mother died when he was in his teens. Or he might have been in his twenties. Regardless, after the night she died, he and all his siblings woke up singing “The Old Rugged Cross.” The next day when they found out about their mom, they got to talking and every one of them said they woke up singing that song. “That was always her favorite hymn,” one said, and then each of them said the same thing. So, that song has always had a real personal connection to our family.

So, when my grandaddy passed away, April 4, 2012, me and my cousin were sitting on the front pew. And the piano was right there, and we had a guest singer who was gonna come in and sing that hymn because it was his favorite, too. The hymnal was already open, and every so often the breeze from the fan would turn a page. And when the singer sat down at the piano, it was opened to “The Old Rugged Cross.” He didn’t have to flip a page.

And Now, Let’s Turn to Page…

Let’s talk about some of the arrangements. The bulk of these hymns are traditional and acoustic, but a couple have distinct interpretations. “Are You Washed in the Blood,” with its thumping bass line strikes me as a Southern white boy’s funk-infused reimagining of some the great black gospel tracks.  On “When It’s My Time,” the band also lets it fly. Even “Softly and Tenderly” ends with a sweet guitar solo.  How did you and Dave decide when and where to step the sound up?

Well, here’s the deal. I call it a “Southern gospel” album because of the gospel, one, but also for Southern rock. All the music I grew up with was born of Southern gospel. Lynyrd Skynyrd – a huge influence of mine, you know? All the soul music – Otis Redding and all those greats – Southern gospel is all it is. So, for it to be a true Southern gospel album, I wanted to infuse all the sounds of the South that make the South so great. And Dave also does, you know?

So, when we first went in, I wanted to make a Jerry Lee Lewis-type country album, but with gospel songs. But when we got to playin’, the first song where we really found the sound – and it wasn’t really intentional – was “Just A Closer Walk With Thee.” We hit that groove there – kinda laid-back, kinda Southern and funky – and we realized this album wasn’t gonna take the Jerry Lee Lewis approach. (Laughs) And we just kept findin’ stuff like that.

Like on “We Shall Rise,” that was the last song we recorded. My great aunt Christine, she was Pentecostal. That was Dave’s grandmother, and she would come every so often and guest sing at our church. And since she was Pentecostal, she didn’t believe in instruments, so she’d come in with her clogs… 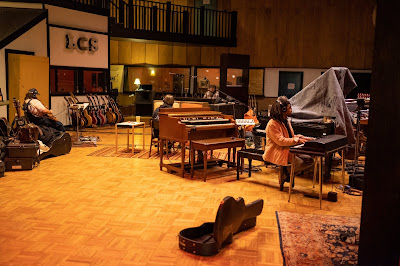 …Man, I know. But she’d have her hymnal while she was clogging, singing “We Shall Rise” in a good a Capella, and she would sing it at the top of her lungs. What’s also a coincidence – I don’t know if I believe in coincidences – is that it was the first single of the album, with no influence by me; that was my radio team. And her funeral is where I met Dave for the first time. I was a pallbearer at her funeral.

Does Cousin have a Grammy winner in the “Gospel” category yet? Asking for a friend.

Dude, he’s got about every other one, doesn’t he? (Laughs) I don’t know, man. Here’s hoping. Who knows?

You’re about to head out to the United Kingdom for a tour. Two-part question: (1) Is there one cut from this record you might consider springing on a British audience; and, (2) What’s the first thing you look forward to on your return?

Well, I’m sure I’ll play “When It’s My Time” when I’m over there. It’s not purely a gospel song, but I think a lot of people can relate to it. When I get back, I’m looking forward to flying straight to Texas and joining Robert Earl Keen on the “Merry Christmas From The Family” tour. That’s just a dream tour for me and I can’t believe I’m on it; he’s been a major influence of mine since I was a teenager.

And I haven’t had a whole lot of time off. I just got off the road with Nikki Lane and Adam Hood, so I am looking forward to being at home for just a little stretch, anyway.

Ye who are weary, come home: And Now We Turn To Page… is out today wherever you purchase fine music.