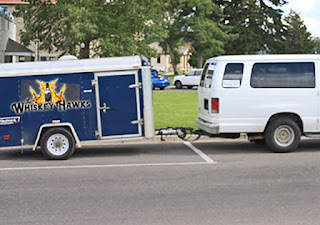 With gas prices hitting an average over $4.25 a gallon nationally, struggling independent country and roots rock band The Whiskey Hawks reckons they’ll just buy an electric van now.
At the urging of celebrities to “walk, take public transportation, or buy an EV” to defray rising costs, the band figures the latter is the most doable. “We can’t walk to Chattanooga or Asheville, and there’s no public interstate transportation, and Greyhound won’t let us bring the amps and monitors, so I guess we’ll just spring for a $53,000 electric touring van,” says lead singer Aaron Lavox. “No biggie.”

The Whiskey Hawks, who have made a profit of $631.09 doing spotty tours over the last two pandemic stricken years, expect to pool their individual savings, kids’ college accounts, and the tips drummer Gus makes at the BBQ restaurant, and will only have five-thousand or so left to go. They plan to start a Go Fund Me to make up that difference.

“It’s surely a sound investment; I’m thankful these wealthy famous folks who live in metropolitan areas where it’s easy to walk or take a subway let me know these great tips on saving money!” laughed bassist James Squier. “Don’t get me wrong, we definitely support Ukraine, despite the fact that you sense that we may be being facetious about buying a van, but let me assure you we are not.”

Russia’s invasion of Ukraine has sent oil prices soaring in recent days, never mind that they were already soaring before that. Some analysts remind us that gas prices this high preceded the so-called Great Recession a few years back, but The Whiskey Hawks just laugh off all the doom-saying.

At press time, the guys were deciding which of them were healthy enough to sell plasma.