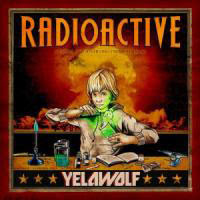 Yelawolf's major label debut, Radioactive, is out today. FTM's a big fan of Yela's rural southern angle on hip-hop. His previous releases were full of classic rock and country influence with lyrics about the darker side of southern living. Think Drive-by Truckers for the rap set.

When he signed with Eminem's Shady Records in 2010, I was pretty excited for him. Of course I was a little apprehensive as well, concerned that his signature sound might get swallowed up by the corporate machine. I erred on the side of anxiousness though, knowing Yelawolf's talent and story (he's a half-white, half-Native American former professional skateboarder from the deep south) will make for a groundswell of support and bring true talent back to mainstream rap.

I'd be lying if I said Radioactive lived up to my expectations. I was naively hoping for something groundbreaking - a Nevermind of rap maybe - bringing his small town gutter sound to the mainstream. Unfortunately, it sounds more like the mainstream was brought to him.

Radioactive is still a very strong album with a few great and mostly good tunes. All the rap skills are there. The lyrics are generally excellent. The beats are solid and the production isn't overdone ….for the most part.

When the album sticks to Yelawolf's strengths it's at its best. "Grownin' up in the Gutter" is an angry rocked up rant which argues that hard times are everywhere, not just the ghetto. "Let's Roll," mines Yela's classic rock influences with an unabashedly catchy arena anthem, with a strong chorus from Kid Rock.

Where the record drops off is when Yela gets away from his meat and potatoes. The tracks that echo B.O.B. are definitely skippers. "Good Girl" is one "for the ladies," but I'm not sure even they will enjoy the annoying chorus and mixed messages. "Made in the USA" is a fairly well-written protest track completely torpedoed by a Debbie Boone meets Lee Greenwood hook. It's so sappy, it destroys whatever message Yelawolf wanted to impart.

Drop a little of this pop filler (which in fact isn't filler - I'm sure "Good Girl" will be released as a single to move a few units) and replace it with a couple more classic rock influenced bangers and Radioactive would be a little closer to that classic I wanted. Still, Yela's way above most of the rest of rap right now. He actually writes songs, not just barking out brags around a chorus. Let's hope his next album gives more of his unique southern perspective.

The latest nonsense from Trailer at 9:55 AM