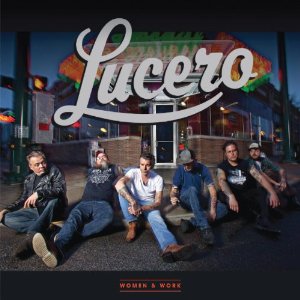 I can't give a Lucero album the review it deserves, so I won't even try. Since I'm too much of a fanboy to be unbiased, I'll just write what I think and let the words fall as follows.

If you didn't like the direction the band went on its previous release, 1372 Overton Park, you probably won't like that they have continued that progression. Horns still reign aplenty, though I didn't notice them as much this time; they've been integrated into the fabric of Lucero's sound. Soul music is still a strong influence on the band… the Memphis sound and whatnot. Springsteen is still in the mix, though less so this time around.

Personally, I don't think Lucero is getting away from its signature sound - no, they're settling into their rightful place.. or at least where they are in the world at this point. This is Lucero, the rock n' roll band. Not the punk band with a country flavor, not the country band with a punk flavor, not the Americana band… the rock band.

The themes haven't changed, though they may be a bit more focused now. Women, whiskey, broken hearts, hanging out downtown - Lucero never strays far from their source material. Write what you know.

The highlights here are the bar-room rocking title cut, the rollicking, piano-intro'ed "Like Lightning" and the gospel-heavy closer, "Go Easy." "When I was Young" is another great cut, heavy on nostalgia and longing.

The lowlights are… well, there aren't any so dim as to take away from the album as a whole. I wasn't big on "Juniper" at first but it's grown on me. If I had to axe one, that'd be it, I guess. I do wish there was a bit more energy present on Women and Work at times, but Lucero haven't in any way settled into the Drive-by Trucker's "sad bastard" songs rut.

Happily, the whole album is a grower. My favorite records of all time are nearly all growers. I wasn't sure how to feel about Women and Work at first, and maybe still don't, but I know that I like it more every time I play it - and I'm over a dozen spins in.

If you've tried to get into Lucero before and haven't been able to get past some indefinable stumbling-block, this may be the best album for learning to love 'em. It's their most accessible work yet. Still no hits on the way, but Ben "sings" (as opposed to his usual full-on, cigarette-throated rasp) a lot more on this disc… that's probably the most jarring thing to me, but it works.

I'm happy to say that FTM's unofficial house band (and my favorite band) is still yet to release a bad album. If I've gotta give Women and Work a rating, I'd say 8/10.

The latest nonsense from Trailer at 9:00 AM