Album Review: The Deadfields - Dance in the Sun 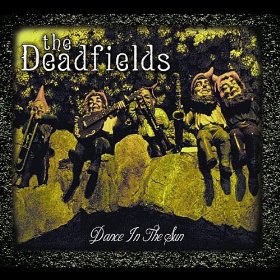 If, shortly after hell froze over, the tastemakers of country radio suddenly came to me and said, "Okay, we're willing to make some compromises with you and your ilk. Recommend some bands with the 'authenticity' you so desire, yet a catchy, well-produced commercial-ness that won't alienate soccer moms," The Deadfields are one of the bands I'd suggest. I gave you that massive run-on sentence to basically say this: The Deadfields are catchy as hell and very accessible, but never sacrifice song-craft or soul for the almighty dollar.

Dance in the Sun, the debut album from this "folk-rock" outfit out of Georgia and the Carolinas, is a work representative of the artists the band mentions as influences. Ryan Adams, Wilco, Roy Clark, Wham!, Hanson, Cracker and Vince Gill can all be heard at times in their work, as odd a collection as that is. The Deadfields' new-grass meets pop-folk signature sound puts them squarely in the middle of the roots resurgence of recent years. They'd be a great fit at your local festival playing between the Old 97's and the Civil Wars, or opening for Reckless Kelly at Billy Bob's Texas. It's that diverse (yet cohesive) and friendly a sound.

The albums opens with the sugar-hooked "Carolina Backroads" which is a far better dirt road anthem than you'll ever hear out of Jason Aldean. The Deadfields' sunny harmonies and expertly played strings make this a real steering-wheel drummer.

"Dandelion" is a far better-written and more memorable take on the theme and approach of Blake Shelton's "Honeybee." It's a lively love song that you don't have to feel guilty about singing along to.

There's not an off-song in the bunch, quite honestly. It's a peppy affair; even the darker introspection of "Till the Next Time" comes off more hopeful than hopeless.

While my glass-half-empty side wishes there were a bit more range of emotion, you never get the feeling that the guys are gunning for the cheerful waves of Clearchannel radio or an upbeat car commercial spot. It's just their way, and somehow the perkiness never gets cloying. The guy/gal duet "We Stick Together" veers the closest to cheese, but still sounds way more Bruce Robison/Kelly Willis than Donnie and Marie.

Warning: if grittiness is your thing, steer clear. The music is honest, but it's as clean and crisp as granny's sheets drying on the clothesline.

In my perfect world, The Deadfields would play alongside Jamey Johnson, The Damn Quails, the Dixie Chicks, Ray Wylie Hubbard and Alan Jackson on mainstream country radio. In this real world, I'll just slot them into my playlists and enjoy the hell out of Dance in the Sun.

Recommended if you like: The Avett Brothers, The Damn Quails, Randy Rogers Band, Glossary, Eli Young Band, the Jayhawks, Dixie Chicks - basically anybody strong on melody and heart. Try 'em, you'll like 'em.

Here's a short interview and the song "Carolina Backroads"
The latest nonsense from Trailer at 12:00 PM