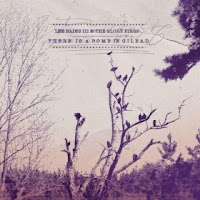 For having such an indie, obtuse sounding title, There is a Bomb in Gilead is far more straight-forward a rock and soul album than anything so difficult to grasp as the latest Pitchfork darling. The forthright Lee Bains III and The Glory Fires emerges onto the scene already a full-fledged force to be reckoned with on this fantastic debut.

Mixing garage rock, country soul and southern swagger into an effortlessly authentic blend, Lee and the boys give a spirited go at every style across 11 spotless tracks. From the driving exploration of faith on album opener "Ain't No Stranger," through the sin, searching and nostalgia of the middle to the hymn-inspired closing title track, there isn't a weak point on the album. In fact, I've listened nearly 30 times and have yet to tire of it.

Lee Bains sings like Jason Isbell with a snarl, high and soulful at times, cranky and quick at others. He's a perfect outlet for these tales of desperation and longing.

And though the band claims not to be a southern rock band, there's really no question about it to those of us who aren't wearing their boots. Bains drawls every line and the riffs are right there in the pocket of some of the legends who came before. And the settings - Magic City (Birmingham), Opelika, the Roebuck Parkway, Centreville - if it's not southern rock, it's at least rock music set squarely in the heart of Dixie.

While every song is a strong showcase of the band's skills, I do have some favorites, mostly right in the heart of the album. "Everything You Took," is a hooky take on the days just following a break-up where the material items kept by the girlfriend don't matter nearly as much to him as the memories she left him.

"Righteous, Ragged Songs" is a motto for the band, if anything is. "I ain't figured out how to pack out a room just yet" speaks to the group's small beginnings, while the chorus proves them mature beyond their years. The song also mentions the profitable opportunities Bain's passed on to go with his heart. Let's be thankful he did.

"The Red, Red Dirt of Home" isn't about Texas - Alabama has red dirt too- it's about the foundations built by where they grew up and the tribulations they've been through. "Got my mama and daddy on speed dial in my phone"… that's some country cred right there that doesn't need a line about "I'm so country in my truck" to drive it home.

Lee Bains III and The Glory Fires have skipped right over the formative section of their career and stepped with both feet right into their potential. There is a Bomb in Gilead is an ass-kicking, heart-pumping, soul-reflecting chunk of rock n' roll goodness that another ten years on the road couldn't make any more honest or cohesive. This album is a statement of purpose.

If you're a Drive-by Truckers fan who isn't happy with the lifeless melancholy of their recent output, this is where to get back in the groove. If you want to like Lucero, but can't get past Ben Nichols' gruffness, Lee Bains is a smooth alternative. If you're a southern rock fan looking for new blood, look no further.

To put a finer point on it, There is a Bomb in Gilead is my frontrunner for best album of 2012. It's that damn good.

Here's a free track  from the album: "Opelika"

You can purchase There is a Bomb in Gilead on Amazon and iTunes.
The latest nonsense from Trailer at 4:00 PM