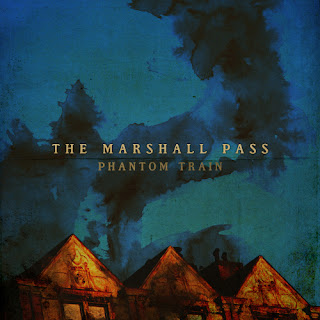 The Marshall Pass' Phantom Train is a melancholy remembrance of a lost friend and bandmate. This singular focus wouldn't make for the best introduction to most groups/artists, but Duncan Arsenault and Craig Rawding impart so much passion-filtered talent on this project that it's a must-hear.

As cathartic as this set of songs must have been for The Marshall Pass to create and record, Phantom Train is no simple exhaling of sorrows. It's a work of great artistry and soul, as informed by loss as it is song-craft. The dark color palette used for the portrait never bleeds to a flat gray.

Phantom Train recalls the lush textures of early Sun Kil Moon and the bluesy vocals of the Allman Brothers. Pass' sound is a warm mix of folk, rock and blues with an authentic twang that would make one think these guys hail from central Georgia, rather than Massachusetts. Everything about the EP sounds organic and unforced.

My favorite cut is "Default Line," which is a better "leave your troubles behind and go live on a beach" song than most pop-country singers ever dreamed of. Other strong tracks on Phantom Train are... all of them (here's a lyric video for another stellar tune, "Abilene"). Seven songs left me wanting. Not for depth, just wanting it to keep on going for another 30 minutes or so.

I hope The Marshall Pass isn't a one-off deal. I'm already so invested in their aesthetic and mojo, I'm itching for another release immediately if not sooner. Phantom Train proves them well-equipped to speak beyond the mourning that makes this release such an emotional monument.

You can sample and purchase Phantom Train at CD Baby, Amazon,  iTunes or Bandcamp.
The latest nonsense from Farcer at 11:00 AM