Album Review: Fifth on the Floor - Ashes and Angels 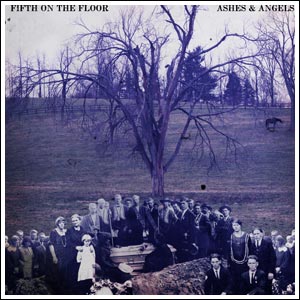 A thumping bass drum and Justin Wells' gritty "Yep!" fire the starting volley and Ashes & Angels is off to the races with as pure a southern rock album as you're gonna hear in 2013. Fifth on the Floor pulls no punches, ripping through the opener, "Whiskey," with a rollicking drum bed, racing fiddles and Wells' one-of-a-kind barroom pipes.

"Shotgun's" limp-horse trot takes the album's second track through a tale of a sin and rust filled town that offers no outs. "Ain't nobody leavin', but dammit, everybody's hell-bound" sings Wells in his unmistakable rasp. You're not to be blamed if the word "badass" comes to mind multiple times while enjoying this album.

"Burnin' Nashville Down" is an imposing, intelligent screed against Music City that avoids all the cliches and buzzwords of the typical song of this ilk. It's an aggressive anthem against corporate country that provides a slight glimmer of hope in that "there's still a lot of soul left to save."

Along the way, Wells trades off lead vocal duties with both bassist Jason Parsons ("Angels in the Snow" "Same Old Thing") and guest vocalist Rachel Brooke ("Wine") on a few tunes, but Fifth on the Floor never loses its signature sound in the transition. While mixing in bluegrass, boogie and outlaw country, Fifth's fabric is always held together by the thread of southern rock. This is a tight and talented group of musicians playing right in the pocket of a recognizable voice built over three albums and scores of live dates.

Ashes & Angels is an unfashionably unadulterated gem of southern rock goodness that proves the soul of the genre hasn't been killed by time or the dilution by commercial acts like Three Doors Down or Kid Rock. Fifth on the Floor is real, raw and hopefully sticking around for a long time to come.

------
Ashes & Angels is available for purchase at iTunes and Amazon (and live shows!).
The latest nonsense from Farcer at 12:00 PM

Email ThisBlogThis!Share to TwitterShare to FacebookShare to Pinterest
Labels: Album Reviews, Fifth on the Floor