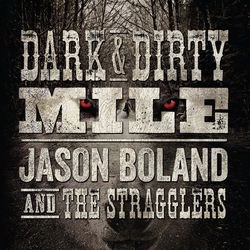 I'm not certain when I first heard the term applied, but the latest release from Jason Boland & The Stragglers certainly embodies the "Thinking Side of Country." Boland has consistently been one of the strongest lyricists in any realm of music over the past decade plus; on Dark And Dirty Mile his words strike much deeper than ever before, an impressive feat coming immediately after the two most critically acclaimed (and best selling) studio albums (Comal County Blue & Rancho Alto) of the bands 15 year run. So what is the difference?

The answer probably lies in one word: maturity. There is a self assurance, a knowledge of who they are & what they do that positively permeates the record. It's a hard-won assurance, honed by thousands upon thousands of shows all over North America (along with several swings through Europe, one of which the band just completed early this month), battles with personal demons both public & private, along with all the introspection that comes with a group of artists who've now been playing music together for their entire adult lives.


The tone is set at the beginning as the albums leadoff track (and first single) is the title song (a first for JB&S), a thoughtful look at the journey of life. All the classic touchstones of Boland's songwriting are here in spades. There are looks into life, love, faith (in a Higher Power & in oneself), and the loss of all the above. There are no throwaway tracks here, and while its not a concept album any more than any of the previous efforts were, it's readily apparent much care was taken with song selection and sequence.

There are cultural touchstones aplenty here, but they aren't the stereotypical beer-trucks-river ramblings usually associated with so-called Red Dirt or Texas Country. You'll grab a history book (or at least Wikepedia) if you're paying attention. From the striking miners shot down in Ludlow, to the Trail Of Tears & Oklahoma Land Rush in the Randy Crouch penned They Took It Away, this album takes a hard look at the past, both personal & public - but that past always informs the present.

Boland has long been one of the best and most accessible songwriters in the game. He's got a knack for taking his own pain, joy, losses & gains and turning them into words that are near universally true. What I found most fascinating about this album is the way the lead track essentially lays out an outline for the themes of the album, and the songs that follow dig deeper into the various themes touched on at the beginning. I'm not sure it's an intentional detail, and it's certainly not a new idea (arguably JB&S 2005 effort, The Bourbon Legend, follows the same pattern with its lead track, The Last Country Song) but it couldn't be executed more flawlessly.

The music is so flawless largely because it is clearly not overproduced. This is the exact sound you'll experience at a live show. The band (Roger Ray, Grant Tracy, Brad Rice & Nick Worley) are at the absolute peak of their powers. Clearly they are a cohesive unit that has reached the same stage of confident self-assurance demonstrated in the song writing. There's no part that shoves its way to the front of the listeners attention. "Tasteful" is the best word that comes to mind for the playing and arrangements.

Shooter Jennings served as producer for the first time on a Boland album and he has clearly chosen to simply try to capture the sound that the band has honed through the years and miles. It would be a temptation for a producer working with such talented individuals to attempt to leave their own signature on the record, but here Shooter leaves his mark by doing what may well be the most difficult thing for a producer to do, he simply steps back and lets the band tell the tale.

Care was obviously taken to ensure that the entire album is a piece of art recalling the days before consumption of music was primarily digital. The cover art is hauntingly excellent, relying heavily upon the theme of the title track.

Yes it's a dangerous, rough journey we're all on through this life. Take this album along with you though, and the journey will be a little richer for it.
---
You can purchase Dark & Dirty Mile here or here (and other places like iTunes).