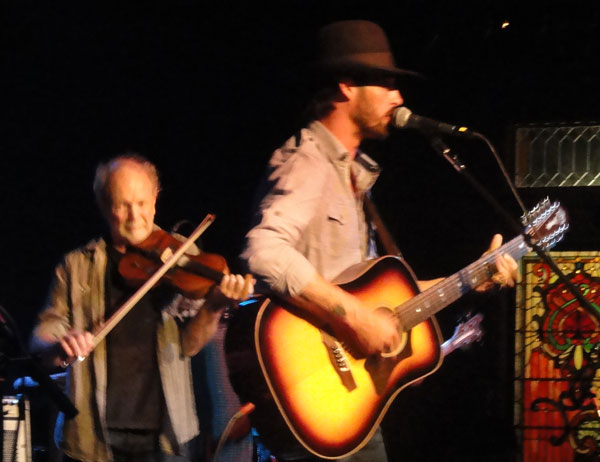 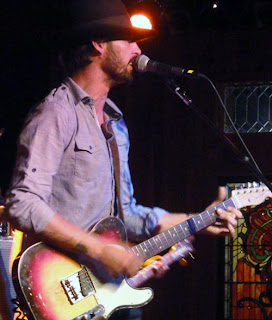 If you haven't heard his latest album, you might not know that Bingham is pissed off about the state of the nation, politics, and the separation between the haves and have-nots.  There's a certain anger that rings throughout the raucous "Guess Who's Knocking" and the restrained "Rising of the Ghetto."  These type songs have been the staple of his career and in a live setting, they come across as poignant and unabashedly fun.
Bingham ripped through a set that included all of the crowd favorites, such as, "Bread and Water," "Hard Times," "Sunrise," "Country Roads," "Tell My Mother I Miss Her So," "Hallelujah," and "The Poet."  Each song was sung with an intensity that is specific to Bingham's style of country-infused folk/rock music.  The crowd was entranced and fully enthralled by the music.  Every song turned into a sing-along and dance party.  If you can stand still during the breakdown of "Sunrise," you truly have no soul.
Bingham's new backing band was every bit up to the task of keeping up with the talented frontman.  The fiddle player seamlessly weaved in and out of every song.  The lead guitarist ripped and roared with killer slide guitar solos.  The rhythm section kept it all together at chest rattling volume.  By the time the last song of the first set was over, you could tell that no one was ready to go home and it was almost inevitable that we would stay until we got an encore.
The encore consisted of just Bingham with an acoustic guitar.  He played a couple of songs before ending with the appropriate "Ever Wonder Why."  With the final line being, "Well, I'll see you all around," it felt like there was no better song to have ended the show on.
If you are only familiar with Ryan Bingham because of this well-known (and deservedly so) song, "The Weary Kind," you are doing yourself a disservice.  He is not to be missed.  Maybe his albums could stand to cut out a song or two in order to be truly great, but each album is still important.  And, if you aren't a fan of his albums, go see him live.  Do yourself a favor.  The charasmatic troubadour will win you over.
The latest nonsense from Farcer at 9:00 AM