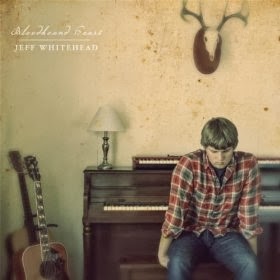 "Every song's a prayer" sings Jeff Whitehead on the opener of his thoughtful new album Bloodhound Heart. It's a statement of personal direction that I wish applied to more artists, but certainly rings true across Whitehead's nine soulful cuts here.

Jeff sings with an old-soul rasp that perfectly matches these songs of love, estrangement, commitment and loss. There's a special attention to the bottom end on much of the album - bass and rhythm, not sugar shakers - sometimes with an upright, sometimes with an almost 70's soul-ballad feel. That rumble gives these songs a weight often lacking in this realm of song.

It's not as if the lyrics need the grooves as a crutch though. Whitehead writes as he sings - belying his youth. The songs are mature and insightful, often solemn, frequently confessional. "Pardon Me," the lyrical source of the album's title, is one of those songs of confession… a prayer to a former love, in this case. It paints a picture of a man who needs forgiveness and, more so, to forgive.

"Rain Like This in Georgia" is about a new start, praying for better weather and better days.  It's a not-too-distant relative, in subject and feel, to soul classics "Rainy Night in Georgia" and "Midnight Train to Georgia."

"Never Going Back" is probably the most radio-friendly tune in the bunch, with its catchy chorus and heavy back-beat. Still, it's not exactly a pop the tailgate and pass around the shine song; Whitehead's a pretty somber dude (on record anyway). This earnestness can be a bit burdening at times but it's coming from an honest place.

Bloodhound Heart isn't party music. It's relax with a beer, or regret with a whiskey music. It's a cloudy Sunday afternoon music. And yes, it's prayerful. Jeff's a strong writer with obvious inspirational ties to both songwriting luminaries like Townes Van Zandt as well as the more reigned-in corners of Motown. It's a joyous downer of a record, well suited to fans of John Fullbright, TVZ, Jason Isbell, etc.

Bloodhound Heart is out today at Amazon, iTunes, Lonestar Music, etc.
The latest nonsense from Farcer at 11:30 AM