Album Review: The Damn Quails - Out of the Birdcage 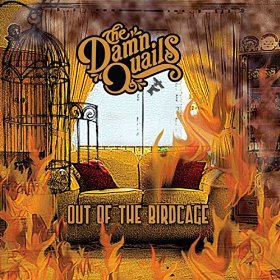 The Damn Quails - Out of the Birdcage
by Kelcy Salisbury

A few years back Norman, OK musical outfit The Damn Quails released an album, Down The Hatch, that shook up the musical scene throughout their home state, their neighbors to the south, & beyond.  The album was roundly praised - it was actually the first album I reviewed for this site (and was FTM's #1 album of 2011) - and the bands trajectory appeared poised for a major breakthrough.  A year passed & the album was still selling relatively strongly, and soon two years were gone with little word of any pending projects.  The band continued to tour,  I continued to poke fun at Bryon White on Twitter,  but it seemed like the idea of another studio project was distant at best & the strain of trying to make a living in the music business in this day and age seemed to be pulling the band apart.  Eventually word broke that there was an ongoing legal dispute with the record label that had released the debut album, but little was allowed to be said about it, aside from promises of future music once the dispute was resolved.  This went on for quite a while, long enough that when the band announced a Kickstarter campaign to fund a new album, I wondered if enough people still cared enough to fund the project (Full Disclosure: yes, I did what I could.), that question was answered in short order as the band easily passed their stated goal & the project was begun.

Usually I try to hear whatever new stuff is available from bands I enjoy, whether it be YouTube videos or whatever.  This time around I intentionally avoided hearing any of the new music until I could listen to the entire album.  So I waited, until one day last week, when Out Of The Birdcage arrived in the mail, which was slightly more exciting than the Harbor Freight advertisement next to it.

The album opens strong, with the title track leading the way.  The harmonies are strong, sounding exactly as the prior album hinted at as a signature sound for The Damn Quails.  Lyrically there are few, if any punches pulled, and although the story told may or may not be a metaphor in places, this just sounds like a band that is absolutely thrilled to be working together again in the studio.  It is the perfect opener & sets a raucous tone to an album that winds it's weigh through considerable emotional territory in it's 12 tracks.  Not everything is as expected though, and that's a good thing as well.  I hear a lot more traditional country instrumentation on a few tracks, most notably the fiddle work on "Woody Guthrie (From The Dust)," and the steel on "Just A Little While."  One of my favorite things about Down The Hatch was the variety of instrumentation from song to song, and the subtle use of harmony as an instrument, all packaged with gut-punch songwriting.  That appears to be fleshed out on Out Of The Birdcage, from the swooping organ on "Give It Some Time," the Stones-like groove on "Tightrope Walker," or the lyrical picture painted in "Man In The Mirror (Girl On The Plane)."

I'm not sure if it's fair to compare one album to another subjectively, and I wouldn't know how to say that one Damn Quails album or another was "better", but I am certain that both are exceptionally honest looks into exactly who the band is musically at that point in time.  Down The Hatch sounded exactly like an exceptional group of musicians with diverse influences, making exactly the music they wanted to make.  Nothing else sounded quite like it, and they had the live skills to build on the songs in a concert setting.  This sounds like the exact same thing, just an election cycle further into life.  Very few bands at any level can survive on so little promotion for so long, and they sure can't do it if they don't have the musical chops to keep drawing people into the live shows without having a new product to sell.  To do it in this age of short attention spans & shorter shelf lives, speaks as loudly to the talent & heart of each member of The Damn Quails as anything I can say. 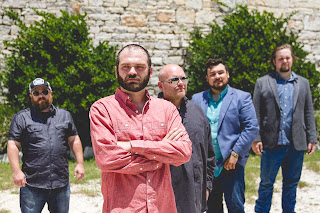 If you're reading this & you contributed to the Kickstarter, thank you for helping make this album happen.  If not, the album will be out on all the usual outlets today.  If you've heard Down The Hatch but waited on this one, buy it.  If you don't like it, Bryon White will personally give you a lifetime supply of nothing & Gabriel Marshall will probably come do your dishes too.  If this is your introduction to the band, it comes as a great starting point.

Out of the Birdcage will obviously be an early contender for a top year-end rating, so I guess I'd better put some kind of number on it.  So give it 5/5 coveys. And go buy it.  Seriously.

(Also, now that Swompfyst Records is actually a thing, assuming that one of their head honchos might see this, you really need to get with Javi Garcia & get a logo drawn up & some merch out ASAP.  You're welcome for the literally several dollars this idea will surely send your way.)