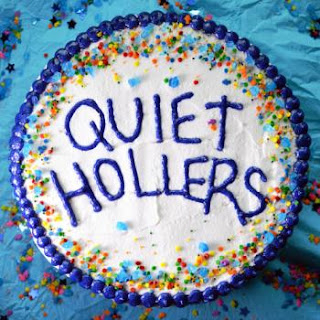 It still escapes me that Quiet Hollers aren’t the darlings of Pitchfork, Paste, or every other music blog covering cool bands that end up on Coachella stages. These dudes should be getting extended interviews in VICE or getting asked what kind of truck stop food they love in the pages of Rolling Stone.

But, that moment is yet to come and typically, I’d chalk it up to the world not being ready or the moment being maybe, just not there yet. This time, though, I demand fucking action.

Quiet Hollers deserve to be selling out big rooms and touring the nation not in a broken down van, but in one of those nice gas guzzlers with a guy’s who’s job it is to drive the bus and let them enjoy playing video games on a tv in the “lounge.”

Quiet Hollers are the perfect example of a band we’d of been peeing our pants over in that “just before everything is available on the internet” phase in the early 00’s that dudes my age long for in some kind of twisted romantic way. Because most kids have shitty taste in music and they like music made by guys name “Crizzly” (Don’t ask me.) All of these awesome bands have to struggle to make a dent in the world, because you know, music isn’t on tv anymore, no one listens to the radio and people think computers are instruments. (Pro tip: they’re not and that EDM shit sucks.) And so all of these rad bands don’t get the coverage they deserve, instead – people flock to the stuff that’s easily tossed in their laps and taken at face value.

Editors note: I stand by my EDM sucks quote. COME AT ME BRO. But, I digress:

On their new self-titled record, Quiet Hollers go light years past their Americana/Lucero/Ryan Bingham styled sound on I Am The Morning and leave it in the dust. On S/T they explore a much different territory that calls upon styles like post-rock, indie, straight rock and roll, but some moments feel like bands like REM or Talking Heads rather than Waylon or Willie inspired them. To maybe even put a finer point on it, Quiet Hollers feel like the logical heirs to the throne of My Morning Jacket and their ilk.

Quiet Hollers S/T is a collection of beautiful writing, layered, brilliant songs. The riffs hit like Louisville Sluggers, without relying on cheap tricks to push the songs over the wall, but instead – they just work. They’re honest, working class sonnets about the tribulations of life as a human on a planet full of completely fucked up people. The record isn’t short existentialism either; it’s got plenty of moments where the human condition to be put through society’s meat grinder is front and center, namely on tracks like "Mont Blanc" or "Departure."

Do the right thing and buy a copy of this record. Then walk into your best friend’s house, throw whatever trash they’re listening to out of the window and accept the consequences. When the friend gets all aggro on you, break out the whiskey and shut the fuck up cuz Quiet Hollers got a lot to say.


and the band's website.
The latest nonsense from Farcer at 11:30 AM