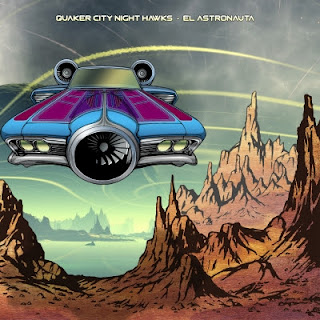 Quaker City Night Hawks are back with a new slab of greasy Texas rock n' roll and seem poised to capture a larger audience. Many a band on the rise would take this opportunity to polish their hooks and sweeten their sound to the ears of the radio listener, but not QCNH. El Astronauta sees them take their sound in new direction, backward.

By backward, I don't mean a regression in sound, I mean a trip in the time machine, ETA 1974. This is an AOR record that wouldn't sound out of place pumping out the windows of a smoky van airbrushed with a wizard/unicorn combo on the side or a trashy muscle car with Todd from Beavis & Butthead driving over curbs.

El Astronauta warmly embraces classic and southern rock, while maintaining the Night Hawks signature esthetic. You'll hear a little Steve Miller, a little ZZ Top or Skynyrd, but it's all with that modern QCNH flair. Not that they haven't always had these influences, the songs are just a lot more steeped in 'em this go round.

Opener "Good Evening" is a loping, bluesy introduction. Its slow burn verses lead into a cathartic "down here on main street" chorus that will surely put fists in the air, accompanied by blasts of stage lighting.

"Mockingbird" is probably the clearest single choice here, it's an anthemic slice of singalong rock goodness. Even it, though, is grimy and dank, like patchouli oil dripping down the wood paneling of a Chevy Custom. This is just a precursor, however… things really take a turn from this point in the album.

To put it simply: the middle of the album could be on the Dazed and Confused soundtrack. That's as high praise as I can think of in the rock world. Light 'em up and trip along to the sci-fi seventies vibe.

The home stretch includes the dialed-back, hazy "Duendes," the even hazier "The Last Great Audit," and the easy going southern sermon "Sons and Daughters." There's a clear emotional arc to the record, and it is that…. a record - meant to be digested whole.

It's a tasty dish, thematically about disillusionment and acceptance, that'll suit any mood or situation. It's party music; it's work background music; it's chill out music; it's driving music. El Astronauta is one of my favorites of 2016 and I hope you give it a listen.

El Astronauta is available at Lonestar Music
Amazon
iTunes
The latest nonsense from Farcer at 11:30 AM