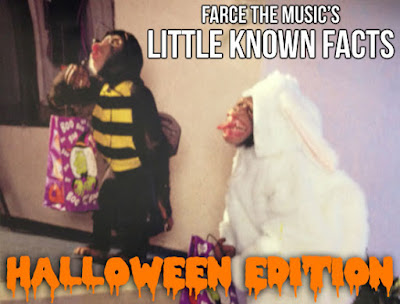 Shooter Jennings recently found his He-Man costume from 3rd grade and
decided to wear it this year since it still fits.

Colt Ford scrapped plans to go as someone less talented than himself when
he couldn't find a Big Smo outfit.

After being up late with a cranky baby, Jason Isbell will accidentally put on
Amanda Shires' pants on the 31st and walk out dressed as Sam Hunt.

Somewhere in Georgia a hay-wagon hitch will break and nearly cancel the hayride
but all will be saved by Brantley Gilbert's wallet chain.

Hunter Hayes has been spotted at Sam's Club buying gallon tubs of vaseline to
grease his face up because just a fat suit isn't enough to look like Gary Levox.

On October 31st Dale Watson will wake up and dress like a badass. Just like every other day.

This year Chad Brock will be dressed as a homeless man on the streets of Nashville.
He will remain in costume through 2018.

Florida Georgia Line decided to not dress as what they believe to be the greatest country duo
of all time because they couldn't decide which one had to be Big Kenny.

Tyler Farr will be arrested on Halloween for parking a hearse outside
a neighbor kid's bedroom and throwing popcorn balls at the window.

After a bad experience with Wynonna's spray tan artist Dolly Parton will be stopped at
the local farmers market for being suspected of smuggling two pumpkins out the door.

Chris Stapleton's costume will not be seen by most of the country but
people that actually know things will agree it's the best costume this year.

By Jeremy Harris
The latest nonsense from Farcer at 10:30 AM