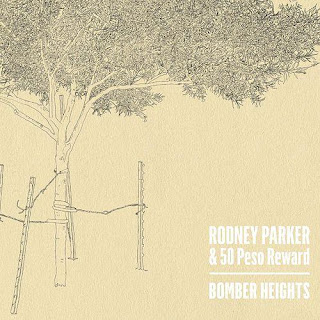 Rodney Parker & 50 Peso Reward have been present in the Texas Music Scene, for lack of a better term, for the better part of 15 years now. They've recorded sporadically, are best known for a Bruce Springsteen cover, and haven't ever been quite at the leading edge of the attack. What they've recorded has been pretty stellar, but much like another of my personal favorites, Javi Garcia, they haven't had the output of the leaders of the scene.

What sets Rodney Parker apart from the pack in Texas is his ability to pare a song, a verse, a line & a phrase, to its bare essentials in order to achieve maximum impact.

In a way it seems fitting that Rodney Parker & 50 Peso Reward are best known for their cover of the Springsteen classic, "Atlantic City," because Parker's style is reminiscent of Springsteen at his best. It's been said that a picture can say a thousand words, but in the hands of the gifted writer, a few phrases can create an entire movie. Parker has always been remarkable at creating memorable scenes with just a phrase or two. The lines from "Tell Me What It Is" come to mind, "...an hour back and forth, just to tell me she's in pain, girl why are you screaming it, you know I know my name..." To me, this is pretty masterful songwriting, that evokes a cinematic quality.

With Bomber Heights Parker and his band, 50 Peso Reward, have created a masterful, literary, cinematic statement.

The album begins with "Steppin' Into Sunshine."  The song offers a series of visuals such as "...there is a priceless work and a box knife" that contrast images of beauty and destruction, light and darkness, before the quietly triumphant line "I'm steppin' into sunshine".  It sets up the album perfectly.

"Skin and Bones" follows as a prequel to Megaphone, which is found on The Apology Part II.

The next major highlight of the album is "The Road Between None and Some," another masterpiece of cinematic lyricism that is (according to my own highly unscientific poll) the best loved song on the album.  The bass line and laid-back pacing of the lyrics belies the dark subject matter, and it works to perfection.


"Night In My Hand" features the loud distorted guitars that have been a hallmark of past Rodney Parker & 50 Peso Reward albums.  It serves as a fine change of pace before the heavy subject matter of "Ballast," which also could function as a companion piece to "I'm Never Getting Married" from 2003's The Lonesome Dirge and "The Day Is Coming" on Bomber Heights.  "Ballast" again showcases Parker's incomparable ability to create vignettes that are as true to life as anything I've ever heard.  If "you were out like a light of my life" doesn't hit you in the heart you might be missing yours.

The album concludes with the dreamy "Moon," a song I see as akin to "Space Oddity" in that it uses the imagery of a man in space (or on the moon as it were) who is to far away to ever return home to the innocence of childhood.

I suggest Bomber Heights for anyone who is a fan of Texas Country, roots rock in general and well written lyrics.  The musicianship by Danny Skinner (Guitar, Banjo & Accordion), Brooks Kendall (Bass), Zach Galindo (Lead Guitar) & Grady Don Sandlin (Drums) is nothing short of first rate.

My only wish is that Rodney Parker & 50 Peso would put out more music, but the truth is, you don't write & play like this without being a perfectionist & this album is fairly near perfection to my ears.

Bomber Heights is available on iTunes, Amazon, Lonestar Music, etc.
The latest nonsense from Farcer at 11:30 AM