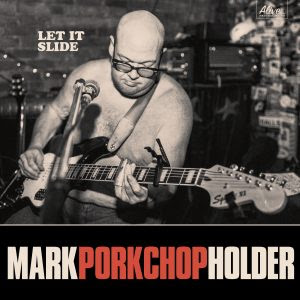 If there’s one thing, I’m a total sucker for it’s some downhome-ass, dirty blues. On Mark Porkchop Holder’s new joint, Let It Slide, we’re treated to some fun blues jams complete with some filthy slide guitar work. Mark is a well thought out guitar player with some serious groove laced through the songs on Let It Slide. He doesn’t rely on cheap riffs, but grinds on those classic head shakers that guys like Dan Auerbach from the Black Keys manage to slay with.

My one gripe with the record is the vocals being too far up front in the mix. I prefer my blues to come with the classic, “all in one” mic’d up room technique from the lo-fi, analog days. I feel like it just makes records with grit sound more natural and warmer. It’s not just Mark’s record that I feel this way; it’s a general observation of recently recorded rock and roll and blues records.

Nothing on Let It Slide reinvents the wheel, but why would you want it to? When it comes to the blues, the guitar needs to ooze, and the battery behind the riffs needs to be airtight. Let It Slide accomplishes both tasks.

Living in central Texas, I’m super close to the famed Luckenbach that Waylon sang about, and "Headlights" is a track that immediately reminds me of the one bar in town. All of the road dog acts passing through on their way to Austin try to hit that stage, it’s a Texas legend. "Headlights" gives off the Sunday afternoon showcase vibe – a song you could drink beer with strangers on a nice day to. And there ain’t nothing wrong with that.

The record’s title track takes its cue from the traditional Chicago blues. It’s mean and talks about what else? a .38 – and we’re left with quite a few questions about not just motive, but what those problems Mark speaks of really are about?

But, minus the vocal mix, Let It Slide is one of the better records out there for the blues genre. If you’re looking for some good time music to throw on for the next barbecue, this one won't bum anyone out, and you might even get a few compliments on your solid musical taste.
Stand out tracks: Stagger Lee, Baby Please Don’t Go

Let it Slide is available on iTunes, Amazon, Alive Natural Sound Records, etc.
The latest nonsense from Farcer at 11:30 AM