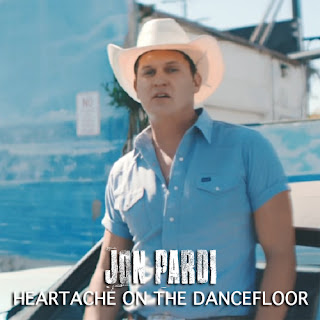 There’s a movement in country called, to me, ‘Boy Deserving Success Gets Success’. Aaron Watson, country’s ‘underdog’, has hit the sales top 50 and the airplay top 40 with "Outta Style;" William Michael Morgan has gone "Missing" with a sound that uncorks the bottle of wine labelled ‘1994;’ Jason Isbell has the number one record in country with zero airplay on non-satellite stations; and Jon Pardi is going to score his third number one with his smart new single, "Heartache on the Dancefloor."

It’s about a girl who attracts the protagonist with her moves on the dancefloor but who disappears before she can be found. There are about eight great rhythmic earworms in this song, including the chant-along ‘moving through my mind’ and the post-chorus ‘yes she is, yes she is’, which becomes ‘where you at, where you at’ in the final iteration.

The setting is a bar in a ‘west coast town’, which is smart as Jon is a Western act rather than a country one (the record is California Sunrise). The use of the word ‘wandering/ wondering’ in the chorus is smart: Jon is both walking to find her, and thinking about the girl constantly. ‘That girl is killing me so I put on this song!’ he says of his attempts to catch her in that same bar night after night. So what Jon is doing is describing imaginary heartache, which comes from not even talking to a girl; it’s sort of a psychic (or psychotic) passion for a girl. Maybe he dreamed her…

The image is instantly identifiable to anyone who ever visited a bar and saw a purty lady on the dancefloor. This time, Jon doesn’t even need to mention boots to get a hit.