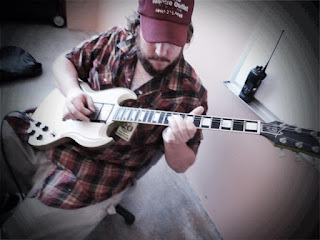 Dango has worked alongside Stoney Larue and Will & Lily Courtney (Brothers and Sisters), and has shared bills with Billy Joe Shaver, Jerry Jeff Walker, Alejandro Escovedo & more. His upcoming record Recluse in Plain Sight was recorded by Steven Collins (Doug Burr, Deadman) at The Troubadour Studio in Austin, and comes out September 1. Dango has recently premiered tracks at PopMatters & No Depression, and was featured in the Americana Music Association's most recent newsletter...

You can pre-order Recluse in Plain Sight at his Bandcamp page.

More information about Johnny after the song player...

From the hushed fields of Stillwater, Okla., to the raucous barrooms of Austin, Texas, the hard work and bloody fingers of singer/songwriter Johnny Dango have given rise to a cosmic honky-tonk thunder, a deliciously irreverent mix of downhome Americana and heady classic rock. Dango has paid his dues in bands such as Brothers & Sisters and The Memphis Strange, and as a sideman for country-rocker Stoney LaRue. And he’s shared bills with legends such as Billy Joe Shaver, Jerry Jeff Walker and Alejandro Escovedo, over the years developing a unique and gorgeously tumbledown aesthetic that is potently concentrated in the neon avenues and creaking front porches of his debut solo album, Recluse in Plain Sight.

“I’m not into paint-by-numbers,” Dango says. “I have no interest in making another generic Americana record. There are already plenty of ‘em out there.”

As the varied tracks on this album unfurl, tackling themes of transience and displacement, Dango slowly reveals the inner mechanics of his influences. From the George Harrison-meets-Mott the Hoople guitar lines of “Hole in My Heart” to the psychedelic ragtime theatrics of “Western Front (War Hymn #2),” he continually smashes rules and upends expectations. While drunken rocker “Barfly” lives in the Stones’ world, sleepy piano ballad “Someday Soon”—written in a traffic jam on the way to a gig—tips its worn pork-pie hat to Tom Waits, Randy Newman, and Father John Misty. Traditional rural sentiments and Southern rhythms get twisted up on “I Was Wrong,” Dango’s “failed attempt at a bad country song,” during which he reorients well-worn sounds into potent ruminations that exhale ache. The off-center melodicism of his vocals deftly mirrors Recluse in Plain Sight’s stylistic realignments, an affecting rumble and shiver slithering through each bucolic chorus. And if a song happens to call for some dramatic Jeff Lynne-style synths, then so be it.

Recluse in Plain Sight—co-produced with Steve Collins—is Dango's resolute answer to the recent homogenization of the Americana landscape. This record isn’t stuck in a cycle of self-glorification, nor is it primed to pander to any awards ceremonies—it’s the result of a heart ready for examination and revelation. Driven by a need to stretch the comforts of his own influences, he positions these songs as rustic therapy and as a necessary escape from what has become a commodified musical perspective.

“It’s so weird how Americana spun off from country into its own thing, like, ‘We reject mainstream country music,’” Dango ruminates. “But then to go and behave the exact same way? I mean, they made up a whole new category, just so they could put on an awards shows and give themselves a trophy. It’s such a bunch of self-congratulatory bullshit.”

Instead of positioning himself as some sort of quasi-country savior, Dango takes solace in the creative freedom of his work, which reflects in equal measure the bold, psychoactive experimentation of the late ‘60s and early ‘70s and the lost years when nascent country music was guided by torn hearts and the need to pass stories from one generation to the next. With the touring that will encircle the release of his upcoming record, Dango will be burning up the highways in search of like-minded souls for whom these authentic sounds represent more than just a passing interest. With Recluse in Plain Sight, he wants you to hear the past and future collide.
The latest nonsense from Farcer at 11:30 AM