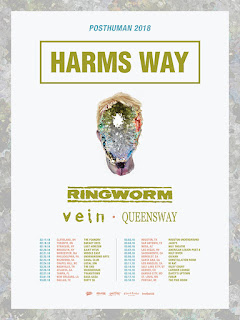 Last night, I cruised down to San Antonio to catch the Harm’s Way and Ringworm show at Jack’s Bar and was pleasantly surprised. Being only my second time seeing a show in San Antonio, I gotta give it up: San Antonio’s hardcore scene is world class. Those kids are passionate, fun and foster a sense of community I haven’t seen since my Chicago days.

I grew up in Hardcore, attending shows around 16 years old at Off The Alley, VFW’s, the Arlington Heights Knights of Columbus, the Darien Sportsplex, and the much-lauded Fireside Bowl just to name a few venues. Living in New Orleans and later Austin, the scenes are unique, and each offers something different, but in comparison to San Antonino, it’s not even close. I tip my cap to the excitement, interaction, and fever of those kids. Definitely made my heart happy to see the positivity and everyone hanging out talking vs. Austin’s scene where everyone immediately splits for the bar. Creeping 37 years old, I’ve been going to shows as long as some of those kids have been alive. I made me unbelievably happy to see that the scene still holds strong.

Harm’s Way never ceases to impress. For 30 minutes, they slammed through tracks off their various e.p.’s and their two latest records, Rust and Subhuman. Energy throbbed throughout the room and kept the spirit of the show moving. For my money, the highlight of the night was Baltimore’s Queensway. Initially, my friend and I were planning on ducking out for a bit to grab some food, considering we’d just driven an hour and a half to make the show. We were walking through the venue when we caught the first song of Queensway and immediately stopped, both recognizing these dudes were going OFF.

Nothing is better than a tight hardcore band, 100% engaged with the crowd, giving their all to the crowd and doing more than just playing outward to the room. Queensway was engaged, poised and destroyed. Jack’s Bar’s reception and throbbed in support and it was clear they’d won the majority of the attendees over by the end of the first song. Having never heard of Queensway, I was taken aback by not only their tightness but their constant energy.

They made a new fan last night and from here on out, I’ll do my best to champion their music to my friends looking for straight ahead hardcore. If San Antonio was any litmus of what these boys are capable of, watch the fuck out. And a word to San Antonio, I’ll be back to dance alongside y’all.