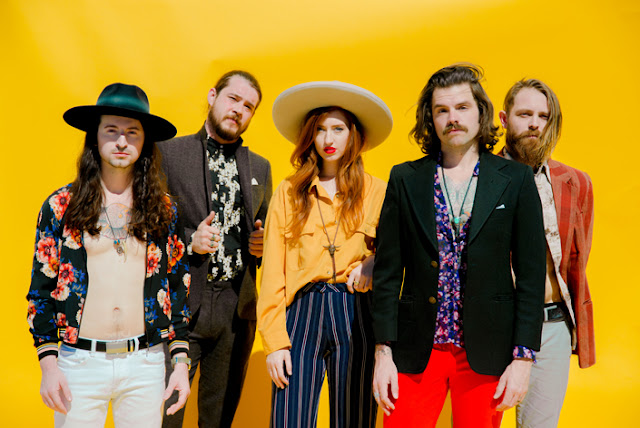 Today, we've got a video premiere from self-described "southern prog pop" group, The Underhill Family Orchestra. I'm glad I kept an open mind when I read the words "folk-rocking collective" in the introductory email. Normally, I'd have moved on, having been bored to tears by most "collectives" in the past, but I clicked play, and was immediately drawn in. "When the Trumpet Sounds" is rollicking folk rock with gospel undertones and a danceable tempo. This is an Americana band that actually sounds like they're having a great time, and it's infectious. Fun is not a bad word. Vocalist Steven Laney has some David Lee Roth swagger and even sounds like him a little, and that's awesome.  Give this video a look - it's hilarious - then give the album a listen - you won't regret it. Recommended if you like: Shovels & Rope, Nathaniel Rateliff and the Night Sweats, The Band, JD McPherson, etc.

Below the video, you can also stream the full album Tell Me That You Love Me.

Steven Laney about the video:
"This video is in part inspired by old straight to VHS movies and a lot of British television ('AbFab,' 'Red Dwarf') with the pacing of old casting reels. We have a good deal of sentimentality for that 90s cassette look from watching 'McGee and Me,' 'Captain Power,' 'Monty Python,' and the like. As we were creating the 'characters' we were playing, they became caricatures of ourselves and we just rolled with it. Ben is kind of a health nut and workout junkie, Roy is super organized, and I'm kind of a mixed bag that loves dogs of all kinds (hot and otherwise). The energy during the shoot was so fun because we knew what we were doing was silly and with that came a stream of creativity from every member voicing great content ideas."

Buy the album at Amazon: https://www.amazon.com/Tell-Me-That-You-Love/dp/B07BJD1R2L