Kasey Anderson has had quite the journey. From burgeoning singer/songwriter (and an early Farce "contributor") to Twitter fame and being seemingly on the cusp of a national break-through …and then came the news of wire fraud, a felony conviction, and prison. After serving his time, he quietly slipped back into society with newfound sobriety and heavy remorse …and now Anderson makes his musical return. His new bank Hawks and Doves releases their album From a White Hotel on July 27th, and whether you've come around on him personally or not, you've got to admit that it's good to hear that voice again. Here's the new live video of the album's title track. Hope you enjoy. 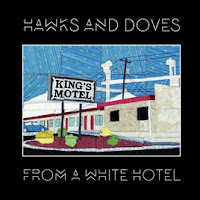 From Kasey:
This is a live version of the title track from the Hawks and Doves album of same name, out July 27 on Jullian Records. The song was recorded live at the Living Room in NYC, February of 2018. The song is entirely autobiographical and references my addiction, bipolar disorder, time in prison, and recovery. It also contains these lines, which tie in pretty nicely to the attached screen-grabbed tweet.

“Well, I ain’t no kind of outlaw and I never claimed to be / so you can take that cowboy shit and you can send it out to sea / on a great big wooden ship with all your love’s debris / and set it on fire”

Pre-order From a White Hotel LP or CD: http://kaseyandersonmusic.com/store