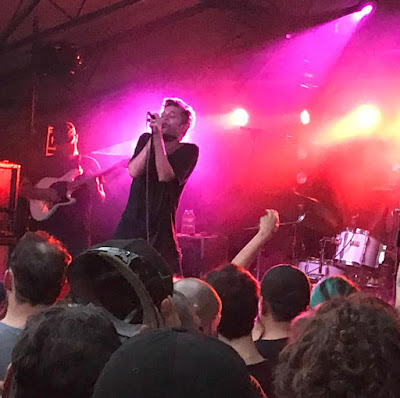 At last week’s show at Mohawk, in Austin, Texas, it was probably my 15th time seeing Glassjaw. I’ve been with the band since Everything You Ever Wanted To Know About Silence dropped during my senior year of high school way back when dinosaurs roamed the earth in 2000.

In the time since then, a lot has changed in all of our lives, we’re a little heavier, our hair isn’t as cool, and we get tired faster after a long night. But, at the heart of it, those songs we’ve had for almost two decades endure. Glassjaw has entered that rarefied air of punk/hardcore bands where people love them on the back of their cult classic status. Glassjaw was never an arena act, but it was painfully obvious who the majority of Mohawk was there to see, with no disrespect to Quicksand, whatever.

Pummeling through songs like “Shira,” “Mu Empire,” “Tip Your Bartender” and “Siberian Kiss” Glassjaw’s current incarnation worked through a few early mishaps to deliver the magic we’ve all cherished for so long. It’s an interesting dynamic to hear Glassjaw’s newest rhythm battery work through the catalog, given their pedigree while playing with The Glass Cloud. While earlier it on, it seemed like drummer, Chad Hasty was playing catch up, but ultimately found his center and moved with precision.

But, the one elephant in the room whenever seeing Glassjaw is their insistence on maintaining a sense of musical and personal progression that borders on frustrating. Since their second “official” album Worship and Tribute dropped, Glassjaw has been very reluctant to play anything from the back catalog before it.

Over the years they’ve cited the lyrical content of those songs, and by all means, it’s understandable not to want to belt out lyrics that make anyone feel uncomfortable.
We get it, everyone gets it, saying stuff that’s shitty and sexist isn’t cool, and honestly not what punk or hardcore taught us about values, respect, or life.

But, our 20’s were a long time ago, and Daryl had a pen and a platform before he knew what power he was actually wielding. But, there are a lot of people packing into those rooms who aren’t as lucky as me who got to experience hearing those songs when they were new. Glassjaw’s new record, Material Control was worth the wait. It’s rock solid, and a welcomed piece of the band’s legacy, but in respect to that legacy, and love for their future, the past should be embraced, if anything as a cautionary tale.

I’d argue that if a palatable way to donate to a cause, or make funding a non-profit with donations at the shows, an easier to pill swallow when singing words like “you can lead a whore to water, and you can bet she’ll drink and follow orders.”

Palumbo isn’t Straight Edge any longer, he isn’t preaching between songs, and there are no side project bands that make fans cringe. Instead, he and longtime guitarist and partner Justin Beck seem at ease in their roles as Glassjaw.

One day, I hope they can find a solution that honors the mistakes of the past content but also champions the fact that Everything You Ever Wanted To Know About Silence is a classic. For its ugly intonations and moments of cringe, there are songs many would love to hear for a night. I would gladly donate an extra $10 to a #MeToo propelling cause and hear a speech about fickle youth and the idiocy of men to hear “Ry Ry’s Song” or “Lovebites and Razorblades” live once again.

Editor: I guess this is Glassjaw from that show… weird as hell looking.