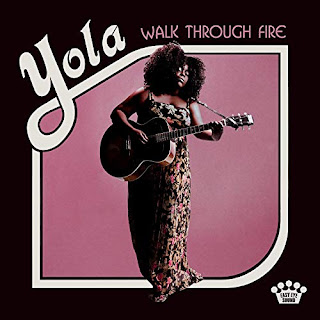 Call her country soul. Call her a singer-songwriter. Call her Americana. Whatever you label her as, British belter Yola Carter is a force of nature. With a rich and inviting voice, loads of soul, and big, enticing melodies, she's an undeniable talent.

Her debut full-length, Walk Through Fire, finds Yola giving us a broad view of her artistry. There are songs for  letting go ("Ride Out in the Country"), songs for holding on ("Rock Me Gently"), sexy country jams ("Love All Night"), and everything in between.

"Lonely the Night" lets Carter show off the comforting lows and thrilling highs of her singing chops. The step-up from the verse to chorus raises goosebumps in anticipation of the crazy release of the chorus, which does not disappoint.

"Keep Me Here" is my favorite song on the album. It's an old-school slow jam with Vince Gill on backing vocals. It finds Yola stuck in a one-sided relationship she really has no desire to leave. This would've been a smash hit in the late 70s or early 80s.

Despite the ability to let it rip vocally, there's a humble authenticity in Yola's work, and Walk Through Fire is a true showcase of both restraint and abandon. These are endearing songs that grab you immediately and stick around. A powerful debut worth your time.

Walk Through Fire is available this Friday on all platforms.