Album Review / Hayes Carll / What It Is 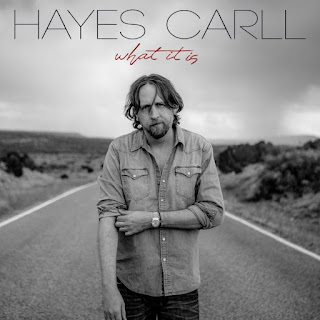 by Travis Erwin
Hayes Carll has a newish album out, but before we dive deep to discover What It Is, actually is, let me address you potential rabble-rousers.
Yeah, I am a writing up a review for an album that dropped a few months back. That’s why I wrote “newish,” my friends. But here’s the deal, no artist has perfected the art of being a “Slacker Genius” better than Hayes Carll, and while I can’t lay claim to the genius half of that equation, I can say I’m a topnotch slacker.
Besides, I wouldn’t exactly be embracing Carll’s lackadaisical vibe, if I just threw out a half-assed review after one or two listens. No, I had to wait and grow my hair out, don a flannel shirt and listen to What It Is three or four dozen times, because to write about Hayes Carll, you gotta be Hayes Carll.
Bullshit you say? Yeah, Rolling Stone didn’t buy it when I pitched that angle to them either.
All BS aside, I consider Hayes Carll a friend of mine. Not because we’ve ever sat down over beers, chased drunken Mona Lisa’s together, or so much as spoken a word, but rather because, for over a decade now, his writing and voice have kept me company through good times and bad.
Carll writes songs that often as not feel like a casual conversation. Couple this songwriting tendency, with a voice that cracks, breaks, and is usually delivered with a calm chillness, and it’s easy to come away with the impression that Hayes somehow stumbled his way to brilliance. This assumption would be wrong. At this juncture in his career, it’s obvious his talent is no accident, and What It Is proves, Carll is far from slacking off.
“None’ya” kicks the album off with a sound any Carll fan will be familiar with. The give and take banter of a couple at a crossroads feels lighthearted, but for our beleaguered Romeo, that “None’ya” is anything but. At first listen this opening track seems like an outlier to the songs that follow, but as in music and life, things tend to circle back around.
The Shut-Up-and-Sing crowd might take offense to the lyrics of “Times Like These,” but they will do so while jitterbugging across the dance floor to a lively beat. Speaking of “Things You Don’t Wanna Know,” track three infuses some Motown rhythm to go along with Carll’s vocals while holding to a developing theme that carries through the first half of the album.

Riding a thumping rockabilly beat that harkens to Johnny Cash, “If I May Be So Bold” joins the two previous tracks to draw a line in the sand. The statements continue to come in “Jesus and Elvis,” as Carll lays out the emotional impact of political decisions. This is not to say the album is preachy in any way.  No, like the two influential men in the title of track five, Carll delivers his thoughts in a manner that suggest better ways, rather than demanding them.
Music is most often digested in bite-sized chunks these days, so the art of album construction is rarely on full display. But the first half of this album closes with “American Dream,” which shines a light on the thoughts that went into overall song placement. This track is the perfect closure to a grouping of songs that makes it clear Carll has something to say about the state of the American Dream.
The back half of the album ushers in a section of three relationship songs. That is the extent of commonality within the trio. Slow, melodic chords accompany the anxious despair of knowing a relationship won’t last in “Be There,” while “Beautiful Thing” rides a piano-charged romp about the euphoria of newfound love and lust. The album’s namesake, “What It Is,” brings a bluegrass sound to the collection and leaves us with many things to ponder.
Unlike the political tones earlier in the album, the next couple of songs are more about universal human rights, than they are about political divide. Exploring the tendencies of human nature, Carll deploys a sharp taunting melody, and pointed lyrics within “Fragile Men,” to slice through chauvinistic ideals. Taken alone that track could come across as judgmental, but when followed by “Wild Pointy Finger” it seems like Carll is looking at himself as well. This next to last track sounds a suspicious lot like “I Got a Gig” from his 2008 release and when you listen to both tunes you can only assume this was intentional, as a way to highlight the change in his own ideas and ideals over the last decade. Both in society and in himself.
The album closes with “I Will Stay,” bringing the twelve songs full circle. The first track gives us a lover walking out the door, while this last track offers a beautiful ballad of perseverance. And no, that is no accident.


Travis Erwin is Texas boy now living the life of a free-spirited writer in sunny Southern California. A long time music blogger and sports writer, Travis is the author of a comedic memoir titled, THE FEEDSTORE CHRONICLES, a pair of novels, TWiSTED ROADS and WAITING ON THE RIVER, and his latest release is a joint, short story/EP collective with songwriter Dan Johnson, titled HEMINGWAY.