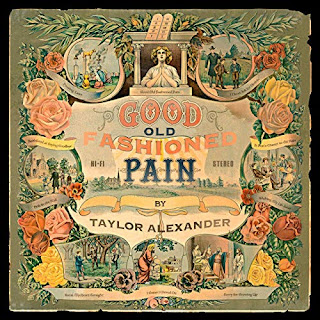 Good Old Fashioned Pain. What a fitting name for a traditional country record, indicative of the reality of heartbreak and struggle that has always been a part of our beloved genre. It suggests an album of hurt and heartache accentuated by fiddle and crying steel, and Taylor Alexander delivers here both musically and lyrically.

We can spend weeks discussing what qualifies as country, but we all know it when we hear it, and this is solidly, unashamedly country. As traditional as this record is, though, it still sounds fresh and energetic. The instrumentation is simple but not sparse, and the production works well with each song. It's country thematically and sonically, but without becoming simply an interpretation of the traditional style, country for country's own sake. The songs feel true to Alexander, a genuine reflection of his story rather than a purposeful attempt to perfect a particular sound. The album also avoids the pitfall common to so many Americana projects of becoming too dark or sleepy with upbeat moments like "Passing Lane" and "Break my Heart Tonight."

The pain itself arrives in different forms. There's the heartache and self-reflection expressed in "Real Good at Saying Goodbye," the financial struggle highlighted in such excellent detail by "Hole in the Wall," and the reality that we're responsible for our own happiness, as told in "I Never Ask For Nothin'." But Alexander cautions himself and his listeners in "Wishing my Life Away," reminding us that although hardship is ever-present, we can miss the blessings of this life by constantly looking forward to something "better." This track provides hope and perspective to a dark record, a gentle reminder that joy is as real as pain and often exists alongside it if we're paying attention.

Good Old Fashioned Pain is an excellent album, great for traditionalists but also accessible, a record to play for your friend who hates the genre or who hasn't explored country beyond the radio dial. Strong songwriting, nice vocals, and that undeniably traditional sound. A fine record, and a promising debut by Taylor Alexander.

Megan Bledsoe is a proud Oklahoman who has been immersed in music most of her life, from writing it to performing it to just appreciating the power of a good song. She is the founder and editor of countryexclusive.com, where she has been writing about great music since 2015.
The latest nonsense from Farcer at 10:30 AM