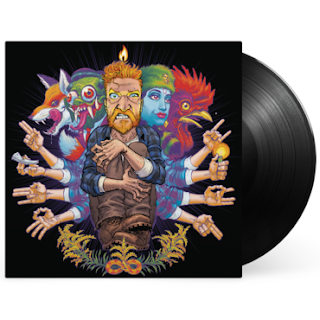 A few months ago, Tyler Childers released the first single ("House Fire") from his upcoming album Country Squire along with the trippy cover art.  It was perfect, in my mind.  I loved everything about the song- from the simple, understated start to the whirring, fuzzed-out ending.  I knew this was going to be an album every bit as good as his previous album (Purgatory).

But then I heard the next single- "All Your’n”- and my excitement dipped a bit.  It seemed decidedly not Tyler Childers.  I wasn't sure what to think of the upcoming album after that song.  Here we have a raucous first single with some crazy artwork followed by a nice, but not all that exciting follow-up single.  But, I was hoping that my instincts were wrong; that it would all make sense in the context of the album.  I mean, Sturgill was a producer for the album and he's got a pretty good track record.

Then the album came out.  And, let me tell you something, it's everything I wanted from a Tyler Childer release.  It's fiery.  It's full of innuendo.  It's sweet.  It's 100% pure-Tyler Childers.  The difference we have here is that he's taken on a bit of that Sturgill-like tendency to make a compelling, complete song-cycle.  While not every song is thematically related, the songs are all tethered together with no real beginning or end to each; only the fade out into the next song.

While it is one cohesive album, there are clear standouts to me on this album.  "Country Squire," "Bus Route," "Gemini," and "House Fire" being my favorites as of right now.  "Bus Route" takes me back to my days growing up in rural Tennessee where I also had a bus driver who didn't put up with shit (Mr. Morris was scarier than hell).  "House Fire" has gotten a little backlash because of the mix, but I think the mix is just about damn perfect.  The only time I think his voice fades a bit is in the second half of the song when all of the instruments are all blending and weaving in and out of each other.  I think of his voice as an extension of the instruments and it works incredibly well.  My wife, after listening to "House Fire" for the second or third time looked at me and said, "This song feels like it's always been around."  That's it.  That's the perfect song.  Timeless and new all at once.

Even when you get to "Ever Lovin' Hand" (you know, the song about self-love), you might giggle at the first or second listen, but then you realize that it is actually pretty sweet.  I dunno, maybe I'm just a sucker for a sweet song, but this one got to me.  If you would have told me Tyler Childers would make a song about masturbation that I'd tell you was sweet, I would have laughed in your face.  But, that's the genius in Childers.  He approaches these topics with humility and humor.  He doesn't try to make fun of anything, it seems.  These are things that happen day in and day out, and as they say, ahem, write what you know.  And as for "All Your'n" I dig it now.  It works totally within the album.  I wouldn't change a damn thing about it or the album.  I apologize profusely for doubting this song.

Last time I saw Tyler Childers, he was in a small venue up here in D.C. called Rock and Roll Hotel.  It holds around 400 folks.  When he comes back in December, he'll be playing at The Anthem.  It holds 6,000 people and it's already sold out (I'm bummed that I missed out on getting tickets to this one...).  Tyler Childers is here and everyone has caught on to his genius.  His new album is a continuation of everything we've grown to love about the Kentucky redhead.  But, there’s also growth.  He tried something new on this album, and damn, it worked.  I'm already dying for more new music.  Go buy everything you can from Childers and go see his incredible band live.  You won't be disappointed.