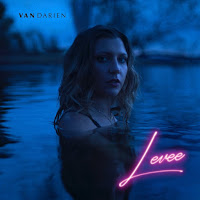 
In the overcrowded marketplace of 2020, wading through all the new releases can be an especially daunting task. We have the whole musical landscape at our fingertips from our favorite streaming services, but all these choices can in turn be overwhelming. When it comes to finding cool new artists, it's theoretically easier than ever these days, but everyone has become so used to skipping through everything which doesn't grab them in the first 8.6 seconds that some of the magic of discovering something new and letting it grow on us over time has been lost. In these times, uniqueness and distinction are incredibly important; you will hear this from every judge/coach on every singing reality competition when they are especially taken with an artist: "There's no one quite like you." It's special and exciting when a new artist stands out and immediately captures my attention as both a music fan and reviewer, and such is the case with Van Darien and her full-length debut album, Levee.

For this listener, it was Van Darien’s voice which stood out from the very first line of the opening track, “Ponderosa.” She’s the vocal love child of Stevie Nicks and Tanya Tucker, with all the grit and soul of both of them and some Bonnie Raitt rasps in her higher register for added color. Vocal ability is not always prized in Americana, and it’s refreshing to hear a technically gifted singer who still sounds this raw and unpolished and just plain interesting.

Sonically, this album fits within Americana, but less because of a folk style and more because of the sheer variety of styles from which Van Darien draws here. The previously mentioned “Ponderosa” is rife with steel and acoustic guitar, with an atmospheric, western vibe that makes it seem like the album might be a thoughtful, quiet, mostly country affair. But then we have songs like “Twisted Metal,” one of the album’s most interesting tracks both lyrically and musically, a hard rock anthem about the chaos and danger of being in love with someone even though logic might say it’s not the greatest idea.

In fact, the way Van Darien depicts love as a whole on this album is nothing short of fascinating. “Twisted Metal” has a harsh beauty about it, perfectly describing the way these two feel drawn to each other despite circumstance. “Insanity” reflects a similar emotion, comparing true love to feeling insane and asserting that perhaps it’s better to be alone than in a relationship which feels lukewarm, mundane, or really anything less than completely, gloriously out of control. “The Sparrow & the Sea,” featuring Owen Beverly, might be the highlight of the whole record, as the story of two people who long for each other and yet cannot be together is revealed to us through the illustration of the sparrow who wishes she could swim in the depths an the sea who dreams of joining her in flight. Each can see the other, but neither can reach across the divide. These three selections show Van Darien at her best as a lyricist and always frame love in a bittersweet light, seeming to portray all the complexities and emotions of it all at once, joy and heartache sometimes existing side by side.

This is a strong, interesting debut from Van Darien. She’s a refreshingly unique artist and a special vocalist. A couple of the songs have not quite caught up to her vocal talent, but there are some truly remarkable examples of songwriting here, displaying enormous potential for her. It’s a promising introduction with some standout moments, and Van Darien’s next record could be an absolutely incredible album. For now, Levee is a good one, go enjoy listening to it and discovering a cool new artist along the way.
-------
Levee is available today on iTunes, Amazon, and the other usual spots.