The Immediacy of Life with Justin Wells

When I called Justin Wells to talk to him about his latest record, The United State, I was in the trenches of a New Orleans-sized hangover. I'd gotten into town the night before and drank myself stupid to the point of sharing an All That Jazz po-boy from Verti Marte with a homeless dude named Mike. Jameson, so much PBR, and endless sketchy bars - yes, I got tested and wore a mask. I used to live in New Orleans, so anytime I drop into town, it's a waterfall of old friends, but then I start doing shots with them. I played it cool for the rest of the trip, but naturally, on the first night, I lost my shit.

Setting up the interview, I wasn't a hard yes on my trip. But once I'd committed, I didn't want to flake, being what they call in the biz, "a professional." So, from the comfort of my Airbnb bed, I was renting from one of my friends, I made it to my call on time while not opening the blinds. The darkness kept me company as I sailed through the conversation, despite working through the throbbing in my teeth and head. Justin Wells never flinched. He handled my bad jokes about a near-death experience with drinking a bottle’s worth of Irish whiskey the night prior with his usual demeanor. A guy like that, he's a road dog, who’s experienced too much to let another journalist who'd maybe, unofficially wound up in speakeasy situations, drinking in the dark with French Quarter bartenders deter him from giving an honest interview. 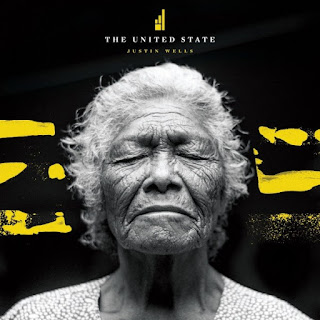 The thing about Justin Wells that people gravitate to is that you feel his authenticity. You can tell he's not playing a game and that his destiny, how he handles his business, but also his music, rests entirely on him. On the new record, The United State, it's a long sounding of the social alarm that we're in this thing together, for better or worse. "I'm tired of having to pick between teams. I was tired of friends on each side of the fence turning on one another. There's so much division and for what? Can't people tell they're being played? It's like a sales call: We're A trying to appeal to B and we're B trying to appeal A. We probably don't agree on everything, but let's pretend so we can get all of the power. There's issues at stake, but not every issue requires a war of this side calls it Fall and this side calls it Autumn."

And talking to the guy and listening to cuts like "The Screaming Song," or "Never Better," it's immediately apparent Wells isn't full of shit. After an honest conversation, he's a reckoning of common sense because those common bonds of struggling through a pandemic should be something we can agree sucks if we'd only leave the politics at the door. "When I wrote the record, we weren't in a crisis, obviously. But the concept is personhood. It boils down to the human experience. There's a universal struggle we all go through to some degree. We can talk about that because we all know what it's like to deal with things at one point or another."

When the Pedialyte started to kick in, I got faster with my thoughts and asked how he was coping during the pandemic. "It ain't easy. I don't even know how to work," he says with a laugh that trails off into a short sigh we can all understand. "I'm dying to get back out there. I miss the fellowship, the people. This music, these voices hollering out together, that's our equivalent of what they do on Sunday mornings. This is our church."

When I asked him what he's hoping for once the vaccines get spread out into our communities, he's onto something, "There were some empty seats back then at the beginning of my career, and we'll deal with it again. We'll get back. I like it when the room is a little too hot for all of us, and the fire marshal ought to be called, that's what I can't wait to get back into. There's a power of live music that I think people are about to rediscover and it's going to be great for working musicians. I believe that." There are worse things to keep the faith dialed in. We're collectively ready for dirty bathrooms, too many overpriced beers, and communing with strangers, offering our faith once again to the church of the guitar cranked through an amplifier and not a care in the world, even if it's only for those precious few moments.

You can buy Justin Wells' record here. Stream it if you must, but at least buy a t-shirt.