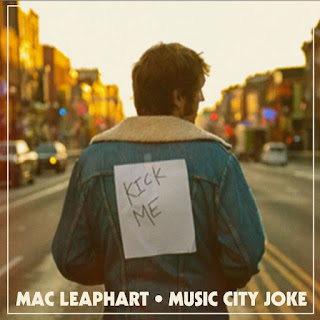 Music City Joke is an album that is sneaky good with simply intelligence and honest observation at the heart of the writing and a traditional sound to the music. “El Paso Kid” is a classic storyteller song delivered in that tender space between spoken word and Folk ballad. There are hints of John Prince and Robert Earl Keen in this story of an abandoned baby which ushers in this album quite well. Leaphart’s vocals are not going to wow those looking for the shiny, but it will wrap around those who appreciate honest emotion.

Remind me of Jason Isbell singing an old Mac Davis track, “The Same Thing” is a nicely written unpretentious song from a songwriter who knows what he wants to say. The whiskey burn of a classic 70s Country song, and the smooth delivery of a songwriter’s intellect will quench your thirst on the track, “Blame On The Bottle.” The Honky-Tonk vibes give way to more a Hillbilly Rockabilly with a dash of Zydeco on “Honey, Shake!” This faster tempo track would be welcome on any dance floor come Saturday night, and while this track comes with a bit more vocal grit, it still feels like the kind of fun that you regret the next morning.

I tempted to describe “Ballad of Bob Yamaha or A Simple Plea in C Major” as Hayes Carll meets Blaze Foley, but the fact is Mac Leaphart sounds like so many different artists at once that you have no choice but to realize he is an artist all to his own. Sure, the influences are there but it is the overlapping, swirling whirls of these venerated influences that produces Mac Leaphart’s own voice and style. This is a track that will both make you smile and think, and in fact you can say the same for most of the songwriting on this album.

“Music City Joke” utilizes the power of honest observation and a genuine point of view to deliver words that talented writers make seem so simple but are in fact, ever-so-hard to distill down in a meaningful way. Leaphart does with ease through the album and here on the namesake track. “That Train” is the most commercial song on the album, but also my least favorite cut on the album. I think perhaps the metaphor and glory days of the train have been tackled in so many songs that it is a tough land for me personally, but for others this relatable metaphor will no doubt be their favorite as it is the most likely track to gain radio play.

The writer in me, fell hard for the imagery and metaphor of “Window From The Sky.” This is the kind of truth we all need to hear from time to time as we avoid flying after and into the wrong thing. The grind of daily life is a toll we all pay and “Every Day” is relatable because of that. The smooth progression and emotional turning of the wheels gives this track a pulse uplifting in its honest relevancy. The entire album has a Kristofferson kind of vibe and it is especially strong on this track. Even if you’ve never been to Nashville’s actual “Division Street,” you can appreciate this track about chasing your shiny dreams in a place where the sparkle is hard to find by the harsh glare of morning light. We all tend to fool ourselves that the underbelly of what we want is all too often a reality rather than a mere speed bump.

I do regret the weeks I could have been listening to this album and it is an early favorite here in 2021. I love hearing threads of influence from so many of my favorite artists, and I appreciate Mac Leaphart’s ability to tip his hat to them, without losing his own voice and style. This is an album I will listen to for years to come and that makes him far from a Music City Joke in my eyes.