A few weeks before I turned 12, Mom said, “Grandmama wants to know what you want for your birthday. They’re coming down.” Because “Beast of Burden” had been all over the pop stations in Orlando, I said, “A Rolling Stones album!” On the happy day, I greedily went for the flat, album-shaped object first, shredding the decorative paper.

“Thank you, Grandmama and Grandaddy!” Scanning the back cover, though, I may have looked perplexed. There was no “Beast of Burden,” or even “Satisfaction.” And who was this weird, jumpy guy on the front? 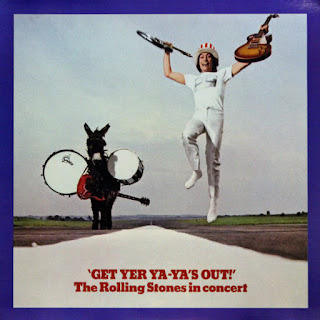 I didn’t know who Mick was referring to before “Honky Tonk Women” when he said, “Charlie’s good tonight, innit?” It would be many years before I appreciated the greatness of that live album, recorded over several nights in New York and Baltimore in 1969, before the release of Let It Bleed. I’d be in college before I realized how sublime the Mick Taylor years were.

But listening to some of these raw, menacing cuts – “Stray Cat Blues,” a nine-minute “Midnight Rambler,” “Sympathy” – it was all over, man. At 12, I was a Stones guy for life. (Beatles guys were, and remain, pansies. Sorry.) Three years and change after that birthday, I'd see The Stones on the Tattoo You tour at what was then called the Tangerine Bowl. The opening act, Van Halen, showed me spandex style. Then I lived substance with the greatest rock band ever.

But that image of a joyous, goofy, leaping Charlie Watts – flanked by a donkey – that’s the icon I’ll always associate with the beginning of my rock ‘n’ roll education.

He was a jazz drummer in a blues band. He took no shit from Mick. One night on tour, the up-late, partying front man rang Charlie’s room. “Where’s my drummer?” he demanded, laughing. Charlie got out of bed, changed into a suit and tie, knocked on Jagger’s door and punched him square in the mouth when it opened. “Don’t you ever call me ‘your drummer’ again,” he said. “You’re my singer!” And then went back to bed.

Charlie Watts (and Ringo, for that matter) would be overshadowed by a couple of game-changing contemporaries, Keith Moon and Ginger Baker. But if you ask any great drummer today to name the masters, Charlie’s name (and Ringo’s) will inevitably come up. To find out how unique and vital Watts was to the Stones’ sound, ask his mates.

“Most bands follow the drummer as he sets the band,” Bill Wyman said. “In our band, Charlie follows Keith.” And it’s so true. Keef, a/k/a The Human Riff, would kick off “Jumpin’ Jack Flash” or “Street Fighting Man,” with a signature hook. Charlie jumped in, Wyman filled in the pocket, and it was just magic. It also has this weird vibe that a song might go off the rails any minute.

Yet they sometimes followed him. Who but a jazz master could kick off “Paint It, Black” and maintain that manic tempo? What sets the table on “Sympathy?” A seductive, hypnotic groove that still raises the hair on your neck as you think of it right this minute.

“Everybody,” Keef said, “thinks Mick and Keith are the Rolling Stones. If Charlie wasn’t doing what he’s doing on drums, that wouldn’t be true at all. You’d find out that Charlie Watts is the Stones.”

He was. I’ve cried plenty today, and I’m not done. This one hurts, and Mick & Keith should shut it down now. Thank you, Charlie, for being the backbone of my favorite band. Thank you, Grandmama, for setting the table.

And thank you, Martin Scorsese, for this precious footage from 2006. The perfect sendoff.