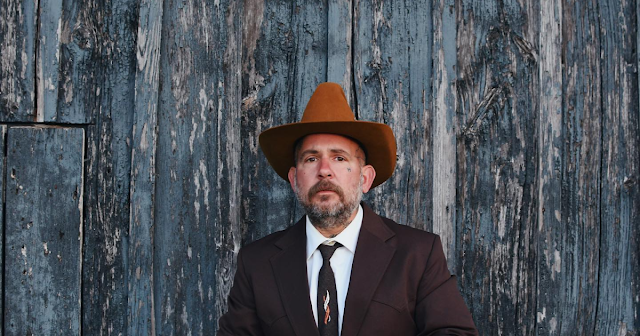 When Jeremy Pinnell released OH/KY in the summer of 2015 to stunned acclaim, it felt like an entire career compressed into one knockout album. Hailed as a “Mind-blowingly good” (GregVandy/KEXP) and a ”tutorial on classic country music” (Popmatters), Pinnell’s debut immediately differentiated as authentic and unflinching.

Dogged touring through Europe and the States and celebrated radio sessions followed, cementing Pinnell’s position as a no-fuss master of his craft. His 2017 album, Ties of Blood and Affection, presented a canny lateral move. Instead of doubling down on the stark themes and values of his debut, the sophomore album saw Pinnell finding comfort in his own skin, achieving the redemption only hinted at in his previous batch of haunting songs.

If the third time’s a charm, Pinnell is all shine and sparkle on the Goodbye L.A. Produced by noted QAnon adherent and Texan Jonathan Tyler, the tunes buff the wax and polish the chrome on country music’s deeper roots. Rooted in his steady acoustic guitar, Pinnell’s songs are shot through with honest and classic elements. The rhythm section, all snap and shuffle, finds purpose in well-worn paths. The pedal steel and Telecaster stingers arrive perfectly on cue, winking at JP’s world-wise couplets. Here slippery organ insinuates gospel into the conversation. You can feel the room breathe and get a sense of these musicians eyeballing each other as their performances are committed to tape. And through it all comes this oaken identity, the centerpiece of his work. Honest and careworn, Jeremy’s voice can touch on wry, jubilant, and debauched -- all in a single line. At his best,  Pinnell chronicles the joy and sorrow of being human, which is the best that anyone could do. Goodbye L.A., nearly two years in the making, is a triumph.

It was a pleasure to visit with Pinnell to talk songwriting, touring, sobriety and…mixed martial arts. 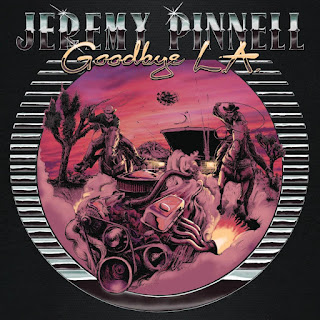 This album has been in the can a while. Y’all recorded in February 2020, played a few gigs, and then the bottom fell out. What was the long layoff like, and did you use some of that time to tweak the mix or anything like that?

Yeah, we recorded it and got it done just under the wire. This is probably a made-up story, but this is the way I remember it, anyway. We recorded the record and came home, and a week later I flew down to see Jonathan again and we recorded the vocals. I came back that Saturday, and I think the next Monday they started telling people to stay home.  But as terrible as this thing’s been for the last – almost two years now – we did have a little free time to do everything right, you know?

Your producer said of you, before going into the studio, “He’s just out there grinding, playing three or four shows a week, driving from town to town. Jeremy’s really putting in the hard work, and his band has gotten so tight.” How long have you and this version of your band been together?

We’ve been going at it about two and a half, almost three years with this group of guys. Junior Tutwiler is on guitar and Charles Alley is on drums. And we switch out a bass player…kind of like the drummer for…

…(Laughs) Yeah, Spinal Tap! Except in our case it’s the bass player, so you never know who you’ll end up with. But yeah, Junior – obviously, Kevin, if you’ve heard the record – you can hear how talented he is. And Charles on drums, he’s so good and has a real knack for just finding the pocket, you know?

This is such a country album to me, and I guess that’s a tautology. But it reminds me of some of the “neo-traditionalists” of the mid 1980s like Steve Earle, Dwight Yoakum and Lyle Lovett, just in its authenticity. Who are some of the artists who’ve impacted you the most?

For this record, I found myself listening to a lot of ZZ Top, like that “Legs” stuff…and there’s a Waylon record, Never Could Toe the Mark with that song “The Entertainer,” from the mid 1980s. There are lots of great songs on there like “Sparkling Brown Eyes,” and I just wanted a feel-good record. So many of those 80s albums were just fun records; people just wanted to have fun. And I wanted to try to bring that back.

Normally I wouldn’t broach this, but the first sentence of the liner notes reads, “Jeremy Pinnell tried dying once.” Your past struggles with addiction are also mentioned. So, would you mind fleshing that out a little? How has your journey to sobriety affected your craft?

Yeah, so…I didn’t play music for a couple of years. There was a time when I…Kevin, I normally don’t talk about it much, but I don’t mind talking about it a little bit. Yeah, there was a time when I was broke and homeless, really with nowhere to go, just going from detox to detox, to homeless shelter. It’s funny, while we were recording with Jonathan, he mentioned being on Jimmy Kimmell’s show in 2010, and I laughed and said, “I was in a homeless shelter in 2010!”

But for a guy like me, sobriety has been really good; a lot better than I’ve been to sobriety. It’s been a positive thing.

Tell me about the guy in “Never Thought of No One.” Is he taking the first look in the mirror for a long time?

The way I wrote that song, I just imagined this character – I had the chorus and a piece of the verse – but I tried to picture a character who just couldn’t turn the corner. Because we’ve all been there, and felt like we can’t find our part for a given situation. Or we’ve known someone like that, who could turn the corner if they could just see their own part. It’s about being in denial without knowing you’re in it. Maybe I’m getting too far off track; but it’s about not being able to see your own faults. Somebody with just a blind spot, really.

In the title cut, there’s an ear-catching line – “Hello L.A., you got some pretty ladies, but they don’t want babies and I do” – that makes me wonder if you ever spent time in Southern California.

(Laughs) Yeah, so we were in L.A. and had just played a concert and were loading in the van. Just me and my buddies hanging out, and there are beautiful women everywhere. And I made the remark – or our drummer made the remark – that, “yeah, but they don’t want to have babies.” Sort of the most ridiculous thing, right? But I thought, “Maybe the girls back in Kentucky will want to have babies.” And I thought about it and, yeah, I’m gonna use that, because it just struck me as hilarious. And it’s kinda cool, so that’s how I came up with it.

Tell me about recording under the conspiratorial eye of Jonathan Tyler….

…I’ll grudgingly acknowledge that he seems to have done some good work here.

Yeah, working with Jon is such a positive, just being able to take his direction. And he has such an eye – or ear, I guess – for music, you know? It was really nice to be in the studio…you know, we came in with the songs, and he would listen and say, “Why don’t we try it this way?” It was just a positive atmosphere. If you know Jon, you know you’re gonna have fun.

I’ve interviewed one artist who’s a Thai boxer, but I’m pretty sure you’re the first jiu-jitsu practitioner. How long has that been a thing for you?

It started at the beginning of the pandemic. I didn’t have anything to do, and the government was giving me money, and I always wanted to know how to fight. You know, you grow up getting beaten up, or maybe get in the random bar fight here or there, but that’s different than understanding your own body and how to interact with another human being.

But yeah, I started at the beginning of the pandemic. It’s been about a year and a half. And I wish I had started at a younger age; I had no idea of the power of martial arts. It’s been amazing. I wish I could do it all the time, but I’ve got a six-year-old. You can kinda get carried away with it. There are a lot of times where I’d rather be in the gym training than playing music.

Do you follow the UFC? Care to give a pick for Volkonovski-Ortega this weekend?

I am a big fan, and I like Ortega a lot just because of his jiu-jitsu.* I’m really excited about the Nick Diaz fight.

Yeah, that one ought to be good. It’s been such a long layoff for him.

Two hundred and nine months or something like that.

Looks like you’ll be touring pretty solid for the next couple months. Will you be back out on the road in 2022?

Yeah, man. I was doing nothing but playing music up until the pandemic, and then went home. My wife and I have bills to pay, so I’m really looking forward to getting back out on the road as soon as we can.

What else would you like the folks to know about Goodbye L.A.?

Yeah, we’re just really excited about it. We spent about a year writing and then rehearsing these songs at sound check. Then we recorded a few demos for Jonathan, and finally we got into the studio and made the record. And Sofa Burn records offered to put it out, and there was no one knocking on the door during the pandemic, know what I mean? So I was really grateful for their generosity in helping us get this record out.

So, we’re really excited for people to hear it. It’s the culmination of a lot of long nights away from home, making hardly any money. Yeah. It’s time.

*While Mr. Pinnell has made one of the best country albums of the year, this doesn’t necessarily carry over to UFC predictions.