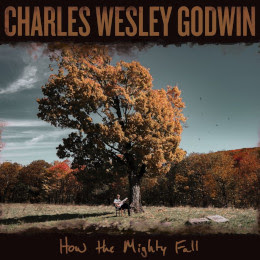 Once you've heard Charles Wesley Godwin's voice, it's hard to forget. It's immediately recognizable and it carries a weight unlike many of his contemporaries. When I first heard CWG's debut album, Seneca, I was immediately hooked. The album was rich with Appalachian music and storytelling. Godwin's voice singing about coal and mining mishaps felt intimate to him and his background as a West Virginian. I saw him numerous times over the years when he would come to DC. I would tell as many friends as I could about him. These friends were usually also hooked at first listen. Needless to say, I needed more and more and it felt like the new album was going to never come soon enough.

Now, 2 years after his debut, we are getting that follow up, How The Mighty Fall. And let me tell you, it was well worth the wait. On CWG's sophomore effort, we get everything we loved about that debut but amped up. We get an album that only CWG could make for the times. Songs filled with death, love, and hope but with that Appalachian spin.

The album opens up with a soft, mountain tune about traveling and constantly being on the move. When the fiddle begins, you know this is not the same style of country music you may get out of OK or TX, or TN for that matter. This is Mountain music. This is real Appalachian music. The scratch of the fiddle is an incredible sound that evokes so much emotion. I really appreciate the touch of that fiddle throughout the album. We then get a strong set of songs that includes the lost-love masterpiece, “Jesse.” CWG can make a mountain out of a mole hill. And this song is proof of such. Taking a graffiti covered bridge and turning that on its head to lament lost love and thusly turning a blind eye to that lost love. This is my favorite song on the album.

The album never lets up from there. The two most surprising songs I found on the album were "Needle Fall Down" and "Cranes of Potter" showing off CWG's ability to craft a beautiful song around tragic topics. "Needle Fall Down" depicts a man at the end of his rope reflecting on the song playing before taking his life. Then we get "Cranes of Potter" about a mad man killing the woman he loved. They are stunningly beautiful songs only made more painful and striking by CWG's powerful voice. It's possible someone with a lesser voice would not be able to pull off "Needle Fall Down" but CWG does so deftly and with grace.

But, don't be fooled into thinking this is a low-key affair. CWG also has a crackerjack band on this release and they let loose for a few songs that absolutely make me pine to see these songs live (when I'm going back to shows since I have a dang 2 month old now y'all!). "Gas Well,” "Blood Feud,” and "Strong" are blood pumpers. Also, bonus points if you knew who Prefontaine was (I did not...). Again with "Strong" we get that scratched fiddle that sounds like it was made for CWG songs. The lead guitar licks on this one are compelling as well.

This is the album I was waiting for from CWG. I don't know that he could have followed up his debut with a stronger album. I know this dude is going to be huge. He's got the songwriting chops, the voice, and the backing band to really make a name for himself and he's well on the way to doing so. If you aren't on the bandwagon, hurry up and hop on. Go ahead and buy this album and everything CWG touches. It's all proving to be gold.

How The Mighty Fall is available today everywhere you purchase or stream music.