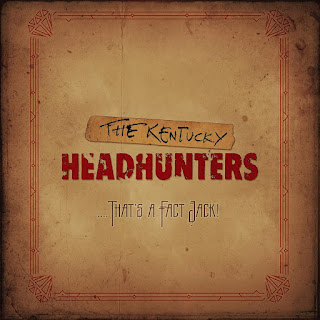 I honestly did not expect to be reviewing a Kentucky Headhunters album in 2021. Usually by the time rockers hit their 60s, they mellow out, phone it in, retire, or die. Not so with the Headhunters, who continue to find new ways to keep their Southern rock stylings fresh after all this time with …That’s a Fact, Jack.

What strikes me the most about this album is the variety of moods. Songs like "Gonna Be Alright,” "Watercolors in the Rain,” and the title track have various degrees of gloom to them, but all three times the gloom is lightened by a message that it's not too late. Even if it's raining in your town, the sun is still shining somewhere, promises the first of these three; "Watercolors in the Rain" emphasizes the desire to leave a good example for those who follow, and "That's a Fact Jack" offers a message to cross sociopolitical boundaries in favor of unity. The Headhunters haven't historically been the types to get topical (the excellent "Crazy Jim" off the last album being a noteworthy exception), but their execution is both poetic and hopeful.

"Watercolors" in particular pops with a softer than usual vocal turn from Richard, combined with an entire verse accompanied by just bass and finger snaps. This is all the more surprising in contrast to his harder-edged snarl on "That's a Fact Jack,” extremely well-suited to lines like "Since man has walked on this earth / Greed has held his hand.” I could easily see this song slipping into a Sturgill Simpson album.

Richard Young's son, John Fred, brings in his bandmates in Black Stone Cherry to add a more modern songwriting edge to "How Could I.” While the lyrics look simple on paper, the turns of phrase and derivations from verse-chorus structure pop out of the contemporary cadence in telling of a guy who messed things up and wants his relationship back to the way it was. The fact that the song has a lively groove inspired by "Keep Your Hands to Yourself" doesn't hurt, either.

"Susannah" almost seems like a shout-out to the Tom Wopat song of the same name in its subject matter of a traveling man and his lonely wife. Unlike that song, this one gives us more detail about how they met, and about what keeps the man on the road (his love of music). It's a great little character sketch the kind of which has been missing from country for so long. Also on the more conventionally country-rock side is "We Belong Together.” Greg Martin skillfully uses some iv chords, always a favorite of mine, to lead us into this understated little winner. Sometimes a good thing works out despite the differences in ingredients -- the rebellious man and the wise woman being a common example. I especially like the line "Never make me believe this is wrong.”

That song finds Doug expanding his range with some well-placed falsetto, which returns for good measure on "Lonely Too Long.” From the title, it's not hard to tell what it's about (finding the perfect soulmate), and the lyrics are the least original on this set ("climb any mountain / swim the deep blue sea"). But there's no denying this song's groove. "Heart and Soul" moves back to the rockabilly side of things with a great four on the floor beat and no shortage of guitar. The lyrical content is more nuanced than you'd expect: the narrator's had an argument with his wife and is embarrassed because everyone knows... and worse, he knows that it was all over nothing but a passing glance at an ex. (As Clay Walker said, "I ain't saying that lookin's a crime.”)

For the first time since "Dry Land Fish,” drummer Fred Young gets to sing too. "Cup of Tea" has a chill and quirky vibe that brings to mind Jimmy Buffett. Its use of Cockney rhyming slang ("what's the lemon and lime") is extremely inspired in its description of that perfect woman. Let me say that again: a Southern rock-Buffett hybrid with Cockney rhyming slang. I told you these guys haven't run out of ideas. He returns to give a spacey blues-rock read of "Cheap Tequila.” Now, covering a song that's been done by such legends as Rick Derringer and Johnny Winter is a high bar to clear, but their take on this well-worn yet well-aged tale of "wash[ing] yourself away" shows that they're far from out of ideas when it comes to dusting off cover songs, either.

Next is "Shotgun Effie.” They originally cut this back in the 1970s when they were known as Itchy Brother. It's also the first time we get to hear Greg on lead vocals since then, and I'm surprised he didn't get a crack sooner. He's got a nicely rough-edged shout well-suited for a simple but effective look at a feisty woman (the Youngs' grandmother, in fact). Between that greasy slide guitar and the driving tempo, there's little change from the original 1974 cut -- but it's such a winner that almost nothing needed to be changed.

With just about anyone else, closing with a novelty song about a family fighting at Christmastime would be a tired old joke at best, and trolling at worst. But lyrics like "You know it wouldn't be Christmas without black eyes /  There's too many cooks in the kitchen / And too many kinfolks bitchin’,” combined with the laid-back and self-deprecating tone, make it a winner. This seems like a family that takes its brawls in stride, and perhaps there's a deeper message to that. We can't get along all of the time, but if we can roll with the punches and enjoy ourselves regardless, then what's wrong with that?

I've followed the Headhunters long enough to gain an ever-growing respect for their consistently high quality. Because they've been together for so long, they know how to make their sounds and influences work together. Even better, they still manage to do it in a way that yields new and interesting results on every subsequent album, and they still sound as energetic as they did on Pickin' on Nashville. The fact that so many songs on this album made me say "Huh, I've never heard them do that before" is a testament to their seemingly undying talent and passion.

I used star ratings back when I still wrote for Roughstock, so I'll do the same here. This one gets a full 5/5.