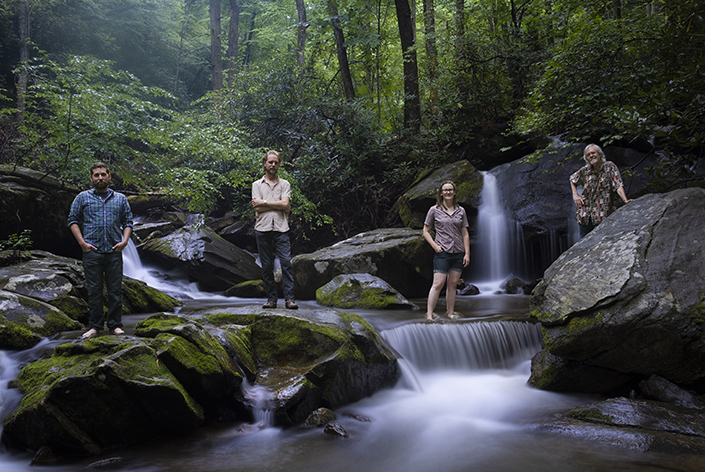 We’ve got an exclusive premiere today from the Alex Krug Combo. Their EP Sleeping on the Woodlands comes out tomorrow, but you can give it a full listen right now. It’s an exploration of nature, love, and life as an outsider. Musically, you’ll hear yearning folk rock with jazz influences, flourishes of country instrumentation, and the emotional spaces of R.E.M.-esque college rock. It’s dreamy, atmospheric stuff, but never gets so heady as to pull you out of the moment, Krug’s clear vocals keeping you in the now. This is the kind of music my mind turns to in the fall, so it’s perfect timing.

Adobe and Teardrops described the EP as “four intricate songs that joyfully wed Americana influences with jazz. These songs will take you far afield, with free-wheeling song structures reminiscent of early-90s queer artists like Ani DiFranco.”

Here are some thoughts and origins from the band on 3 songs from the EP:
“Woodlands”
It was winter in western North Carolina where I live.  The mountains had new snow and a crispness about them.  A few friends and I drove to go for a hike on a remote trail that follows a clean fast river.  I walked in the back behind them, our foot steps making fresh tracks in the snow.  It was late in the day and the beginnings of dusk were coming in around us, deepening shadows.  I was looking around at the young green snowy hemlocks and the sycamore, which leaned over the creek with their strong smooth gray and white camo trunks and dry winter achene dangling from the thinner twigs, unfazed by cold winter.  The words just came to me there on that walk for some reason.

“Overboard”
Is for those who are on the outside, that are on the periphery, who have been, in some way marginalized, tossed out, thought unworthy, not included, neglected, dismissed, hurt and harmed, sometimes killed (due to hate, injustice, prejudice and ignorance).  This song is so close to home I have to let it speak for itself.

“Merriment”
An exploration of head over heels love and admiration.

More information about the band and album are below the player.

Life is at its very core about exploring. We can remain stagnant and rooted in place, or we can take a page out of the Alex Krug Combo’s playbook and dive headfirst. The thrill of adventure looms ahead of this heart-driven blues-rock band, and with a new EP called Sleeping on the Woodlands, the Asheville-based players strike a stunningly evocative chord about life, being an outsider and the kind of heartache that transforms your soul.

In their burgeoning career, the Americana six-piece already boast quite a list of accomplishments. To-date, they’ve shared stages alongside such movers and shakers as Horse Feathers, The Hip Abduction, Erin McKeown and Donna the Buffalo, among countless others, and stormed such gigs as LEAF Festivals, All-Go-West Festival, Grey Eagle, Orange Peel and Pisgah Brewery. Additionally, their 2015 EP, Gentle Spotted Giant, was named one of the Top 5 “Dreamiest Local Albums” of the year by the Mountain Xpress and features production work from the prolific Michael Selverne (Motley Crue, Steep Canyon Rangers, India.Arie), as well as contributions from Bill Berg (Bob Dylan), Lyndsay Pruett (Jon Stickley Trio) and Jackson Dulaney (The Blood Gypsies, The Aaron Burdett Band).

It’s been four years since that very first project, one that is as bold as it is raw. Lead singer, songwriter and musician Alex Krug is a colossal force of power, strength and charm, and her voice emerges as a diamond in the rough. Having grown up in rural Maryland, Krug didn’t have many friends, but she did have a record player in her room. Left to her own devices, she would jam out to many classic ‘60s records spanning every genre you could think of. “I’d get lost in the sounds,” she says. Krug also made frequent visits to her grandmother and would tinker around on an old piano to pass the time.

Krug’s parents later purchased her a Yamaha keyboard, and she soon began writing her own songs and playing music. Free from inhibitions, she followed her muse wherever it so happened to lead. In 2007, she moved to Asheville, North Carolina, and initially, she abandoned music altogether. Her work took her to Wilderness Therapy, an organization to help troubled teens with behavioral and emotional problems find a new lease on life.

Two years later, though, music beckoned her back in, and she formed the Alex Krug Trio, a collaboration which included her now-ex-girlfriend. “It ended in a heartbreaking way,” she remembers. The Combo iteration as she now knows it kick started around the time she met Bill Berg, and they began to jam out together. “Drums changed things a lot in a great way,” she says.

That’s when Gentle Spotted Giant took shape, and her artistry reached soaring new heights. “That album was a really huge for me. I got to meet Bill, and it brought us all together. He has an insane sense of groove, and he’s one of the best drummers in the country,” says Krug, whose vocal inflections are tightened with production that’s earthy, yet slick. “He slays all the way.”

Berg’s pedigree not only includes a brainstorming studio session with the one and only Prince, but he once worked as a senior animator for Disney. His credits include work on The Lion King, Aladdin and Beauty & the Beast. You could say Berg’s vast style and sense of color and ambiance spilled between media in a way that revitalized what Krug could do on her recordings.

“That album also overwhelmed me. I got to work in awesome studio, so it took me a year or two to lean into having a drummer and learn how to play with a really good drummer,” she says. “I was letting go and trusting the music and them. Once that started happening, it was really freeing. We like to set each other free, and it’s like a machine now.”

Sleeping on the Woodlands is four tracks of rollicking, organically-produced Americana. Recorded at Echo Mountain Recording, the collection is a steam locomotive barreling down the tracks -- the team behind the release is an exquisite lineup, including executive producer Jessica Tomasin, mixers Michael Selverne (also primary producer), and engineer Julian Dreyer. Even more, Jackson Dulaney’s work on lap steel is astonishingly tight-knit, as is Zack Page’s upright bass, yet both permit the arrangements to really breathe on their own. Truly, it is Alex Krug and her mountain-crushing vocals and evocative storytelling driving the industrial-sized apparatus.