I Don't Know What's Going on Here, But I Like It 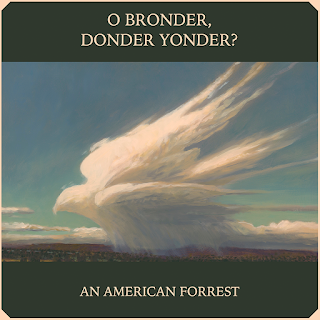 Gotta respect a dude willing to live for his art. An American Forrest has a new record dropping, O’ Bronder Yonder Donder? And while I have no idea what the fuck that title means, this project is super cool.

Check out this bio:

“An American Forrest is the name of Forrest Van Tuyl's western music project. Van Tuyl was recently a featured performer at the 2019 National Cowboy Poetry Gathering in Elko, Nevada (alongside folks like Ian Tyson and Colter Wall, nbd).

When Forrest isn't touring in support of his music, he works as a cowboy in a pack outfit hauling explorers, researchers, and their equipment into the two-million-acre expanse of the Wallowa-Whitman Wilderness. He spends many months of the year on horseback, and training horses.

As a result, his lyrics are full of contemplative, complex verses that trot and canter as honky tonks, and western hymnals. His new album O'Bronder, Donder Yonder? was recorded at Mike Coykendall's Blue Room Studio in Portland, Oregon. We hope you'll give it a listen. I'm attaching links to his latest videos, filmed in and about the wilderness near his home in Enterprise, Oregon.”

TWO MILLION ACRES. Dawg, I need fried chicken sandwiches in life and Desus and Mero highlights, I can’t be riding in the rain up in God’s Country. But, my man Forrest is all about that life. Check out one of the three new videos they’ve dropped and go buy a copy of the record May 10th, so when this mountain man emerges from the wilderness, he can buy a pair of Vans.

Also, shout out to all of the cattle roaming through one of the videos.

And here’s “Yonder My Love”