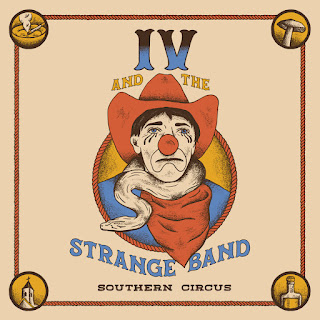 I don't think you'd be necessarily at fault for being a bit leery of another generation of the Hank Williams lineage. I mean, we're on the 4th line here. It's worth being suspicious. I was a little put-off by the whole idea. Here we have Hank 3's only son calling himself "IV" and his band "The Strange Band." It feels like this is about to be reductive. And I guess maybe it is to an extent. But, one thing is apparent here - IV has every intention of taking every single part of his lineage and making it his own. He's done a damn fine job of it on his debut album, Southern Circus.

IV himself acknowledges that it was a struggle to shoulder the name while trying to make a name for himself. I think what you get with this album is a complete acknowledgement of that name with some very good jukebox-ready country songs as well taking those country instruments and turning up the distortion on those instruments. When "Stand Your Ground" moves from delicately-picked country folk to more driving rock, it fits. You can start connecting those dots of where he comes. But again, don't think of this album as complete nostalgia. There are stories here in a way that none of the Williams that came before quite have done. Songs with compelling stories fill the album up mostly to the brim. Yeah, there are a few songs that are vessels for the band and that's fine too because the band is tight. The band knows what they're doing. They're bought into this notion that genres don't have to be exclusive. "I'm Gonna Haunt You" is this kind of song. The lyrics are fine, not particularly memorable, but the music is infectious and brooding- and for those of us that listen to country music and heavier rock music, I think sometimes we gravitate to that, so it works for me.

But, then we get to "Malice" and let me tell ya, this is one of the shiners of the album for me. It has a killer fiddle line. It's a song about a couple that hates each other. It's a sad country song. The way IV lets the music breathe life into this song is something more experienced bands are so good at. This song screams of the true potential of this band and this songwriter. I mean, it's still macabre because there's an image to uphold here. But, it works. It's a damn fine country song.

"Drinking Sad" also completely shows what IV can do should he decide to fully embrace the country side of him at some point. Clever wordplay and a crackerjack band take the song to another level. These are songs that deserve more attention than they may receive as people overlook them for the more unique, darker representations of IV's music. Which leads us to the last two songs of the album.

"Son of Sin" was the first song I heard when IV started making the rounds last year. I was worried this song was going to be the kind of reductive album we were going to get. Now, I say that and it sounds bad. BUT, I like the song and I like the song particularly with the rest of the album. I just felt like it was completely what you'd expect from Hank 3's son. But, this song is high octane and the country tinge to it is fun. It adds flair that completely takes this song to the next level. Which leads us to "Filth." This is the kind of song that I do appreciate more for the music than the lyrics. I could take or leave the lyrics, but the music is fun and it's another version of the high octane country-ish rock music that can be expected of the 3/IV crew. But, the last minute of this song reaches another Doom/Stoner Metal plateau and damn does the band deliver. It starts to make sense how the band can tour with Eyehategod.

There's a lot more that can be said for this album and I think many people will have PLENTY of things to say about it and the lineage. I've probably said too much already. But, listen for yourself. See what you think. Give IV the chance he deserves. He and his band are a strange bunch for sure, but what else would you expect?

New Video / IV and the Strange Band / "Stand Your Ground"

From the forthcoming Southern Circus.
The latest nonsense from Farcer at 1:00 PM 0 complaints

Email ThisBlogThis!Share to TwitterShare to FacebookShare to Pinterest
Labels: IV and The Strange Band, New Videos

From the forthcoming album Southern Circus.