Nothin’ Worth Believin’ Past the Cleveland County Line: A Conversation with Jason Scott

Caught halfway between amplified Americana and heartland roots-rock, Jason Scott & the High Heat create a sweeping, dynamic sound that reaches far beyond the traditions of their Oklahoma City home. Too loud for folk music and too textured for Red Dirt, this is the sound of a genuine band rooted in groove, grit, and its own singular spirit, led by a songwriter whose unique past — a Pentecostal upbringing and years logged as a preacher-in-training — has instilled both a storyteller's delivery and a unique perspective about life, love, and listlessness in the modern world.

While his bandmates — Gabriel Mor (guitar), Taylor Johnson (guitar, keys), Alberto Roubert (drums), and Ryan Magnani (bass) — grew up listening to popular music, Jason's childhood was shaped by the sounds of Sunday morning church service. He sang in the choir and eventually learned to lead his own congregations, often turning to music to get his messages across.

A multi-instrumentalist, producer, engineer, and session musician, Scott launched his solo career with 2017's Living Rooms. The 5-song debut EP introduced him as a folksinger with a knack for "fun little earworms" (NPR), and he spent the following year balancing his time between the road and the studio, where he produced albums for Americana artists like Carter Sampson, Ken Pomeroy, and Nellie Clay. Things began to expand as he assembled the High Heat, a band of multi-faceted musicians and roots-rock Renaissance men who, like their frontman, juggled multiple artistic pursuits. Together, Jason Scott & the High Heat have since become a self-contained creative collective whose talents include songwriting, music production, photography, video direction, and more.

Castle Rock marks Jason Scott & the High Heat's full-length debut. "Quittin’ Time" makes room for a dual-guitar attack, a barroom piano solo, and a storyline about a hardworking man's fruitless attempts to escape his limited horizons, while "Cleveland County Line" flips the script, delivering a narrative about a prodigal son bound for home after a dark spiral of Kerouac-worthy travels. Lead single "Suffering Eyes" — with its twinkling keyboards, chugging power chords, and cascading guitar arpeggios — is heartland rock at its modern-day peak, as panoramic as the Oklahoma plains themselves.

This album will remind you of a lot of your favorite artists, yet every song is original. Jason Scott may be a man of few words, but his music has a lot to say. 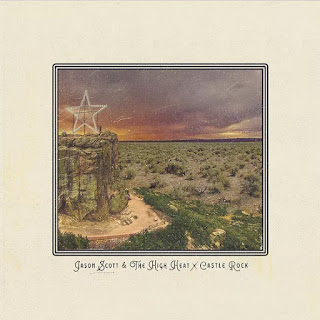 You hail from Oklahoma City, but this isn’t a red-dirt record; I hear more Tom Petty & John Prine than Ragweed or Turnpike, for instance. Can you share who some of your eclectic range of influences are?

Sure, yeah. Well, those two for sure, Tom Petty and John Prine. I like James Taylor a lot. I like songwriters: Guy Clark, Townes, stuff like that. And just about everything in between, really. Hip-hop…Kendrick Lamar. I’ve got a bunch of old Dean Martin Christmas records, too, so I like a little bit of everything.

You’ve been producing records for a while. How did that help with the efficiency of the recording process, and implementing your vision for this album?

I actually went to school for some “studio stuff” at ACM here in Oklahoma City. I’ve just been in and out of studios for the last 15 or so years of my life, and several of the guys in my band are in that environment, too. Taylor Johnson, who plays guitar for us, is an incredible engineer and producer. So yeah, having a team around you like that certainly helps in the start you get from start to finish, that’s for sure.

An interesting nugget from your bio: You grew up in a Pentecostal household and were actually training to be a pastor before dealing with – and I’m quoting here – “a crisis of faith.” Expound on that a little; how has it affected your writing, and familial relationships, for that matter?

I definitely had an “I’m Leaving” moment, and that put some distances in some friendships and relationships for sure. Most of the ones who count are still people in my life. But going back to songwriting, you know, the Bible is full of good stories, so being a Pentecostal certainly influenced me in my writing.

When I heard the tag line, “Ain’t nobody gonna roll the stone away” in “The Stone,” it initially conjured images of the first Easter. But that’s a song about a veteran and his wife coping with PTSD. Tell us how that song came about.

For a while, I’ve been startled with the amount of suicides in the veterans’ community. It’s not a song about a specific couple, but it’s something a lot of households have dealt with the last couple decades. And to be honest, those numbers haven’t improved that much. And I think I just wanted to say something about it; I mean the song doesn’t really offer any solutions, just more of an “it is what it is” situation. I have some friends and family who are veterans, too, so that influenced the song or at least wanting to make the song.

I’m a sucker for pretty harmony. Who’s the lady with the voice?

I have a couple of girl friends on the record. Abbey Philbrick has a band here in Oklahoma City – and they’re just amazing. And then Carter Sampson is a long-time buddy – I actually helped produce some of her records, way back – and she’s on “Castle Rock” and “A Little Good Music.” There are a lot of great girl artists here in Oklahoma City.

You just led me right into my next questions. “A Little Good Music,” may be my favorite cut. It’s full of good advice; what was its inspiration?

Uhhhh…my wife. (Chuckles) We have two kids, and sometimes life…well, it’s easy to get stressed out. I don’t know if there was a specific moment that inspired it, just the last nine years generally.

Tell me about the preacher raining down fire at the beginning of “Sleepin’ Easy,” and how they’re tied together. And I’m wondering if this is the first time Ambien has gotten a shout-out in a country song?

Hmmm. I don’t know. There’s probably something out there about it. But “Sleepin’ Easy,” too, incorporates being a parent and stressing out. Being a parent in today’s climate – politically, economically, all of that – is part of the stress in that song: Just trying to keep your head above water, and everybody seeming to need something from you. And [including the pastor at the beginning] wasn’t meant to be a slight, more an acknowledgment that if you go to church, you have to pay to attend, in most places.

That final cut on the album is where we hear the phrase “Castle Rock,” which I understand is somewhere you lived upon taking your leave of the church. Care to explain?

Yeah. My mom & dad split up when I was about 12, and I went to live with my mom in Castle Rock. And without going into too much detail, it was a crazy time in life for me and my two younger sisters. And I basically got to do whatever I wanted; there was definitely less focus and attention on the kids. For the first time in my life, I was doing stuff outside of a church building. Castle Rock was a time of change of me, so it was important to include some of those experiences in this group of songs.

With as crazy as the past couple years have been, have y’all had a chance to road-test any of these songs, and are there plans for a tour after the release?

Yeah, we’re in discussions with a pretty well-known booking agency right now, and we’ve got shows starting in February. And we’ve absolutely played these songs live and gotten miles out of them in many different places. But hopefully we’ll be able to add a bunch more dates really soon, and I’m definitely excited for that.

Castle Rock is out today!