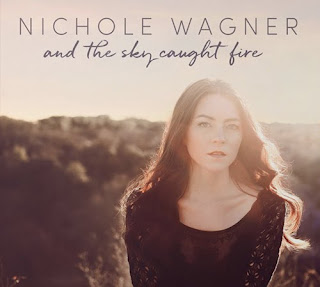 A few nights ago, I stumbled into a Tom Waits night at one of our local haunts, The Volstead, down here in lovely Austin, Texas. The night as a whole was entertaining; the Volstead has a creepy lounge vibe, so the context was perfect. And for a free show, the artists who played a few songs impressed me. They all worked the Waits-ian thing of being a little oddball with their delivery, working the room for the jokes and banter lost somewhere in the shadows or cobwebs.

If any cities can pull off a Tom Waits night, Austin is definitely on the short list.

One of those singers that I immediately enjoyed was Nichole Wagner. After belting out two Tom Waits tunes with a country twang, I wanted to hear what her original music sounded like.

On Wagner’s latest record And The Sky Caught Fire, the excitement for her music is validated. The country twang is in full effect, offering a little slice of Kacey Musgraves older songs, mixed with a little bit of The Civil Wars concerning vocal approach.

And The Sky Caught Fire feels very “Austin” with its production sensibilities, but also has a slight poppy feel to it, as well. While I sincerely enjoy Wagner’s vocals and songwriting ability, I was a little underwhelmed with the backing band. Something about “The Rules of Baseball” and “Let Me Know” has a darkness that’s not on front street, but permeates the air. Because of that internal expectation, I’d like to hear what Wagner could do with a band who was sonically closer to Jason Isbell’s 400 Unit or whoever is backing Margo Price.

Music nerd gripes aside, And The Sky Caught Fire is a solid country/Americana record. The production is bright, and the craftsmanship is there. If you’re looking for something that you could throw on while cooking dinner, this has that sensibility, which having a few good dinner records is never a bad thing. For a first record, this is a fine place to start kicking. At a slim 35 minutes, Wagner packs in a lot of punch in just a short amount of time.

If you’re down here in Texas, I’d suggest giving Nichole Wagner a shot out in the clubs. She handled those Tom Waits songs with velvet gloves and made them her own, which was transfixing. I’m definitely going to catch her live because I have a suspicion she’s capable of throwing fire when it’s her songs we’re listening to.

And the Sky Caught Fire is available on Bandcamp, Amazon, Spotify, etc.