Penguins with Knives Have Come For Your Daughter, Chuck 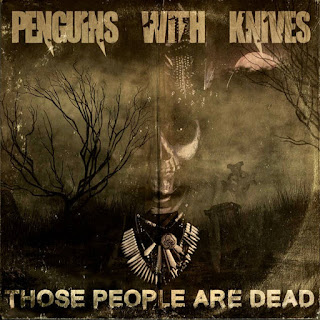 Penguins with Knives is a goofy name for a band. But you know what's not goofy? The jams these dudes from New Orleans crank out.  The band's debut record Those People Are Dead, PWK is a subtle mix of bands like DOWN, Acid Bath, ZZ Top, and a little Memphis soul all wrapped in a filthy, dirty gas rag.

There's some experimentation going on throughout the record, but the identity of the music never waivers off into unfocused territory. Instead, what PWK do is level an attack that's balanced and heavy, but also palatable thanks to how the vocals are phrased. Despite being four guys used to hammering back some whiskey shots with plenty of Pabst Blue Ribbon chasers, the sounds on the record are a solid batch that offers a lot of promise. The New Orleans spirit comes through via the sonic grooves stitched throughout the album, giving frontman Benjamin Deffendal plenty of chances to capture his moods across the songs showcased.

"Pickpockets and Loose Women" is a New Orleans sludge banger with all of the requisite head-bobbing riffs one needs while keeping their beer close. The smoke-infused intro with its wailing feedback is straight from the Eyehategod playbook, and there's absolutely nothing wrong with that. "Tale of The Wandering Witch" is distorted, nasty and heavy but keeps the groove at the center of the song, always keeping its foot on the gas.

Trying to stand out in a town like New Orleans is hard. When you do breakout, you become canon immediately, it's just how serious people take the metal that comes from the Crescent City; it's dirty, it's flawed and always fucked up, but it's also delicious. Penguins with Knives is no expectation. If they continue to make more music, this is an excellent starting point, it can only get weirder, darker and sludgier from here. And you know, what? The world needs more bands that make you want to hoist your drink while making the nasty doo-doo face while you silently whisper to yourself, "fuck yeah, that's sick."

Check out Penguins with Knives on Bandcamp today. Don't be a cheapass, buy the record. They put some elbow grease into it. 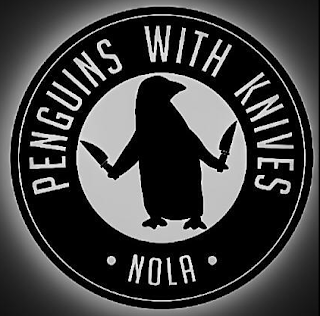 New Orleans is known for music. Some of it is colorful, shiny, and makes you want to dance down the block. The brass swings and the grooves drop like the bodies that litter the daily news. There’s hip-hop in New Orleans that leans on cultural nuance and themes that extoll the virtues of inner city life. In New Orleans, music is the lifeblood of all things, all events, all moments have a beat. But, there’s one style of music that New Orleans is especially adept at churning out and when it’s done right, it aches personality and signature. That music is sludge.
There’s something about that humidity, the water, the scent of the air that affects band’s mentality in how they attack a song, how they pull on their guitars and get to work. Summers in New Orleans are miserable. The nights are sticky and refuse to let up. Because of that unrelenting heat, it scrambles the mental eggs, it morphs perceptions and equates to fluctuating views on the world at large. And because of all these factors, it goes right back into the blueprints of sludge. The groove is soulful. The attack isn’t for the jugular like most metal. It's more for hoisting beers and bobbing your head because it’s too hot to mosh.
The grand New Orleans tradition of heavy metal has lent us such luminaries as Phil Anselmo who’s fronted a bazillion bands, but most notably Pantera and DOWN. There’s Eyehategod, Soilent Green, Goatwhore (Admittedly not sludge), Thou, Mountain of Wizard, Exhorder, Crowbar, Corrosion of Conformity (Pepper is from New Orleans, and Pepper era COC is the best COC), and Acid Bath.
The musical heartbeat goes deep, and it goes funky. Some of the bands maybe are or aren’t so deep on the spectrum of what one defines “sludge” but to drive a finer point, all of these bands aren’t just good, they’re titans of their respective necks of the woods.
But, as the New Orleans scene continues, there needs to be new blood. And finally, after a long withdrawal of bands to count among those actualizing what the Crescent City sounds like, we’ve arrived at Penguins with Knives. Admittedly, it took me a while to get past the name. But, I’ve been known to enjoy the first two Korn albums, as well as don’t mind some Cracker or Toad the Wet Sprocket.
On their debut e.p. Penguins with Knives manage to lay a whole lot of history out in just a collection of songs. Think the riffage of DOWN, and maybe even some vintage DeLeo brothers Stone Temple Pilots mixed with vocal delivery of a more frantic, paranoid Acid Bath. On each of the four songs, they offer different looks into the band, allowing for a signifier of what’s to come. The battery is tight and the guitar work doesn’t feel bargained for, or that they’re trying to cram too much into a small space. A lot of times on the e.p. the less is more approach works rather than doing the impossible to come off cheesy in the admitted Sabbath worship that’s at the heart of the style.

Being their first batch of songs, the completeness of the concept is considerably there. That’s exciting. In New Orleans, bad music and bad food never last. If something doesn’t stand on its own, folks move on. There’s just too much delicious competition. This debut e.p. stands on individual merit against any and all comers in New Orleans, Southeastern Louisana, and the Gulf Coast.
Get Penguins with Knives on your radar. The band will be fun to follow as they progress. There’s little snapshots into faster more punk-y inspired stuff, and then on a dime, the vibe flips to a Blues vibe. The collective identity of being chameleons of the groove is intoxicating and as we see the band grow and develop, only time will tell where they go next.
The latest nonsense from Farcer at 11:30 AM 0 complaints