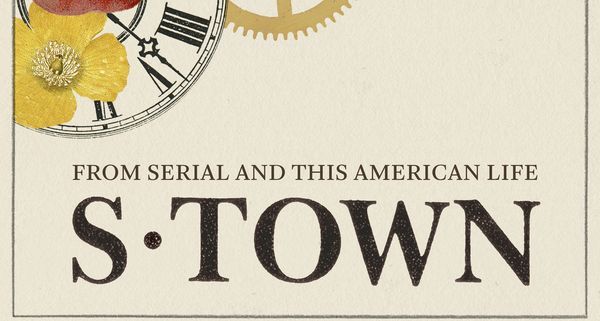 DISCLAIMER: Spoilers within – DO NOT READ IF YOU’RE NOT FINISHED LISTENING

If there’s anything the S-Town podcast teaches us, it’s that we’ll never truly KNOW someone, ever. We may feel bonded by personal experience, stories, and communication with friends and loved ones, but all of the connections in the world only go so far. People will always remain a mystery.

Shit Town, as it’s called once you get past the milquetoast censoring for the Middle America set, is as disruptive to the head and heart as humanly possible. It’s a masterpiece inside the duality of lives we offer publicly and what we do behind closed doors. It aches with personality, but challenges the listener to accept that tragedy comes in many forms.

Shit Town is the latest audio masterpiece from the perennially fantastic crew behind This American Life and last year’s foray into deep journalistic podcasting, Serial. The only thing is, while both of those products are genre-defying monoliths that deserve every ounce of praise – they’re not Shit Town. Shit Town is different. It’s bigger – it’s something that breaks your fucking heart.

The life lived by John McLemore

As I’m sure you’ve heard from Twitter and Facebook, Shit Town starts with twisted genius John B. McLemore. John B, as everyone in Woodstock, his shit town outside Birmingham, Alabama knows him calls This American Life.

John B claims he knows of a murder covered up thanks to extensive wealth and small town politics. Shit Town producer Brian Reed bites. He and John B begin a series of hours-long phone conversations and eventually leading Reed to visit rural Alabama in the name of a second-hand murder story. Sounds cliché enough, but that’s exactly where the normalcy of everyday crime ends, and the tragic narrative of John B. McLemore begins.

Instead of leading us down a whodunit path that Serial had last year, Shit Town wipes the dirt off the underbelly of southern life that so many people are too scared to come near thanks to layers upon layers of unchecked hyper-masculinity percolating in the backwoods and on the main drag of small town America. John B is everything but. He’s a complicated loner with a mind that never stops ticking, as he’s a clock maker – one of the best in the world. He’s a closeted homosexual, a liberal, an ardent challenger of social rights and nuance, but he’s trapped in a locality that will never understand him.

John B lives in the woods with his mother, but not in some serial killer shack, but a house that’s been in his family for generations. He takes in strays, just as he does people – often finding himself in social relationships with a variety of folks down on their luck. He keeps a rose garden that’s built into an honest to god maze straight out of a Guillermo Del Toro flick. He doesn’t watch movies or television, but can quote passages from books, or do complex mathematical equations that would make a tenured physics professor blush. (The guy built an astrolabe in college.)

His level of mastery with clockwork is unchallenged, having people from all over the world seek him out to fix their broken timepieces.  John B. McLemore isn’t a regular dude from Alabama.

The markings of a mad genius

John B’s rapid-fire knowledge of chemicals, sciences, social issues, mathematics done on the fly is almost too much. The guy can break down, within a casual conversation about why a penny exists in the greater scheme of American currency, and further yet, explain the exact chemical breakdown of what said penny is made of – all of the top his head, at about 85mph. McLemore demonstrated such savant-like abilities in his filthy workshop out behind his house. Drunk, McLemore asks for a dime out of Brian Reed’s pocket. McLemore gold plated the dime using a bucket, some dangerous chemicals, and two electrical wires hooked up to a car battery.

How does a man, who’s staggeringly brilliant allow his mind to rot away in these backwoods? Shouldn’t he be standing in an auditorium somewhere, giving point by point breakdowns of carbon footprints or why we need to rely less on X infinitive?

Despite having every opportunity to leave, McLemore chooses to stay, to wallow in the murk of the town he loathes so much and is proclaims at every chance. John B. McLemore is an enigma who at one moment can talk about his closeted sexuality, but then drop “fag” in a demeaning way. To say the man is layered would be an extreme understatement. Escaping his hometown, the polar opposite of everything he loves just isn’t possible. Shit Town grounded him in ways no one could quite figure out. Genius runs with strange bedfellows and John B. McLemore is no different. He was just too smart for his own good.

And that’s when the show shifts into a past tense.

Shit Town isn’t driven by the murder. We find out pretty quick that the death talk of Woodstock is nothing more than just that: talk. No one died, just a little banged up, but that’s how life in small towns go: a small story turns into headline news over night.

John McLemore kills himself by episode three, and for the next four episodes, we travel down this rabbit hole what it’s like to be a genius stuck in a small town, but also what it’s like to be a small town who’s got an eccentric asshole who won’t stop prattling on about climate change. Like as in life, John B. McLemore never did anything easy. Instead of putting a pistol in his mouth and swallowing the night, he swallows cyanide.

The color of money

There are rumors of John B being loaded, that he’d “unbanked” himself and has gold hidden on his property – but, one aspect of John’s life he neglected was leaving assets and a will. Despite being a meticulous bookkeeper and someone who notated almost every transaction in life, John couldn’t commit to keeping a detailed breakdown of what should happen should he die. Even weirder still is that John B talked openly about killing himself, which as everyone agreed, wasn’t an idle threat, it was a fact they’d all expected at some point.

Then, there’s Tyler. Tyler is John B’s de facto best friend. Tyler is a complicated dude himself, but he’s more or less just chasing ghosts and trying not to be his piece of shit father. As much as you want to be like, blah – Tyler. You can’t. The guy doesn’t affect you that way. Instead, you see the complicated love between Tyler and John B. Although it’s apparent in the subtext that John feels something deeper for Tyler, the friendship is natural and emotional, with both men learning from one another on a variety levels. When they leave one another, they always depart with an “I love you.” – something you’re not supposed to do in the south.

We meet a friend of John B’s who describes their relationship in such a clinical, old school southern way, it’s like a harken back to the Faulkner-era, except the guy is an open gay man who loves Broke Back Mountain, and tells a vivid recollection of wanting to kiss John’s nipples. But, John was a complicated man who, despite his outward sexuality in certain circles, could never be totally out in his environment due to the obvious. He was a man without a country. The inability to find another man to satiate that fast working, mechanical mind is honestly, sad. John was a lone wolf by a complicated life, not by his chaotic nature.

But, while he was a lone wolf, he was also the king of the black sheep, too. Because of his love of Tyler, John supported his friend in ways no one else could. He gave Tyler work around the house, constantly constructing things for him. He supported Tyler in his quest to tattoo, even allowing Tyler to tattoo countless portions of his body – despite having an open, visceral hatred of all things tattoo-related. He gave in and let his friend stay financially afloat at the cost of his own body.

“You do not need to leave your room. Remain sitting at your table and listen. Do not even listen, simply wait, be quiet still and solitary. The world will freely offer itself to you to be unmasked, it has no choice, it will roll in ecstasy at your feet.” – Franz Kafka

But, with John killing himself, that leads to a messy digression that has town clerks getting late night phone calls and a pair of cousins who claim to be doing right, but at times, you just can’t say what their intentions are. Just as everything appears to unravel at a car crash speed, it all moves right back into place, sort of. The house and the property gets sold to the family of the original murder in question, which feels disgusting.

The emotional knot Shit Town leaves you is too real: especially if you live in the south. There are so many misnomers about southern life, and thanks to the past election and its finger on the pulse of white, working class men, this examination into the mindset of middle and low-brow America shows as that, not all things are what they are perceived to be. Despite him being long dead, as a listener, you yearn to hear John B’s thoughts on a guy like Trump, or some of our social issues today. (The podcast was taped over the course of years, with McLemore killing himself in 2015.)

The cost of brilliance

But, what the podcast does is examine our true selves and what we perceive our world to be. What we atone to when the lights are out, and what we desire out of life. The movements of Shit Town move like a best-selling nonfiction book in the vein of The Devil In The White City, or hell at times, Fear and Loathing in Las Vegas – a text that moves at it’s own pace, but keeps you moving along, inch by inch.

The ultimate arbiter of why we’re so drawn to Shit Town is there are so many elements we see in ourselves, yes – but, we’re ultimately driven to love John B. McLemore. We want to experience his insanity live and in person, we imagine him going crazy on chat shows, offering up worldviews that are staggering, to be a voice amidst the insanity plaguing news cycles. John B. McLemore should be ours to enjoy, but instead, thanks to Brian Reed, millions now mourn a small town madman. He should have made it out of that place alive.
-----------

Editor's note: We know this isn't music related, but it's relevant to the discussion of southern culture, from which much of the music we enjoy was birthed. And Robert wanted to write it, so so be it.
The latest nonsense from Farcer at 11:30 AM 0 complaints