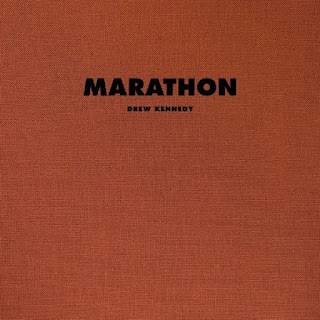 If the desert had a voice, I can’t help but think it would sound a lot like Drew Kennedy.

That might come across as pandering, or at the very least obvious given the title and geographical setting of his latest album, but as a longtime fan of Kennedy’s, this is not a new thought for me. I am a native Texan, a windblown son of the Texas Panhandle who now calls Southern California home after forty plus years in the Lone Star State. Drew Kennedy originally hails from Pennsylvania and now proudly calls the Hill Country his home.

I write these facts to highlight the fact that here I am, an expat of sorts writing about an adopted son. Texas might not truly be its own country, but the state is certainly as close to independent as any nation in this land. At least in spirit and my upbringing shapes how I see and react with this world. So long before Kennedy created his side project, Ocotillo, or this new album Marathon, he pulled me in with emotionally laden songs like “Vapor Trails” and “Stars In California.” As a novelist, Drew’s storytelling and strong emotive threads spoke to me. Stuck to me one might say, like the barbed spines of Cholla, so when I moved here and visited Joshua Tree I thought of Graham Parsons first, and Drew Kennedy second because I can hear his music in the rustle of the ocotillo or feel the sheltering emotion of his words as I stand in the meager shade of a Joshua Tree. 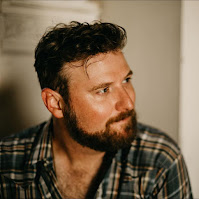 I feel a link to Kennedy as a fellow creative and that is because of the emotional relevance he spins into his words. We are both big, bearded men with softer sides that I would at least like to think is born of empathy for the human condition. So yeah, I’ve long been a fan and still, Marathon just might be Kennedy’s best work to date. Unconventional in both its creation and sound, the heart and life show in unexpected ways. This is not a studio album in that it was recorded in the tiny town of Marathon, Texas, but it very much is a finely crafted and polished product. I won’t spoil the fine work Kennedy did by describing any of the history or wonderment of the area but then again, I don’t need to. It is all there in musical form for you to enjoy.

Painting in both words and emotions, Drew Kennedy sets the scene with the title track, “Marathon,” and he does so with a calm soothing style that feels like sitting on the porch beside a skilled historian and storyteller. This opening track invites you to sit and listen in to a place that time might not have completely forgot, but has left mostly unscathed.

In these days of streaming music and a barrage of singles, a finely crafted album is a rarity, but Kennedy and his collaborator Davis Naish have arranged this collection like chapters of a novel. Each track tells an individual story and weaved together they form a larger picture. After setting the scene, “Peace And Quiet” is where this story about broken hearts and the quest for belonging truly begins. “The Hat” then takes our forlorn wanderer and gives him mentor of sorts. No one wants to feel like their best days, or at least final adventures are behind them because we all hope to have a piece of us continue on and this track takes that metaphorical idea and transforms it into the tangible.

Walt Wilkins very well might be the poet laureate of Texas, so Kennedy’s take of Wilkins’ “Watch It Shine” is one of those pairings that feels like stepping out in the warm sunshine after a long cold night. No matter how dark it has been, letting the warmth hit you reinspires and reinvigorates, and this is a track that I will turn to over and over again, fully expecting more meaning to shone through with each listen.

The oompah cadence of “West Texas Cloud Appreciation Society” reminded me of vintage Robert Earl Keen blended with Randy Newman. The track left me longing for a dance partner to grab and waltz across the floor. “Hi-Ho Silver” carries a hint of 90s Country but still delivers Kennedy’s intense emotional edge both in the performance and writing. Nostalgia and pop references combine to create the lonesome sensation only remote places can instill, but the track also brings out the unrelenting heart and determination of those who seek out such far-flung places.

“Hope” is a fragile concept, but one we all need, and this track walks that line in a way that lends credibility to the story with its genuineness. Drew Kennedy is an easy guy to root for. His positivity and compassionate outlook invites you in much in the same way the hopeful character of the track “Lucky” helps us feel the spark of falling in love.

Few things have been romanticized as much as trains and while “Sunset Special” is less about the glory days of rail travel than it is the emotional side of being excited in love it was inspired by a train that passes through Marathon on its travels back and forth from New Orleans to Los Angeles. The actual train is called The Sunset Limited but how that got mixed up is a story for Kennedy to tell because one of the hallmarks of a Kennedy’s live shows is the storytelling that goes on between offerings.

“Boots On My Feet” is a song about travelling and how no matter how far you roam, your past goes with you. The spirit of Guy Clark is almost tangible on the final track, “So Far To Go.” The build pulls you along instilling the sense of wisdom shared and knowledge gained. The track does not tie in directly to the album’s overall narrative, but with lyrics about love shared and emotions earned the song is universal enough that few people will even realize the story has ended. That said, one can argue story endings are simply the new beginning to the next story. I hope that is the case because as the story of Drew Kennedy’s “Marathon” closes, I am left eager for the beginning of his next great tale.

Marathon is available everywhere you buy and stream music tomorrow.

Travis Erwin is an author and freelance music critic. His latest novel, THE GOOD FORTUNE OF BAD LUCK was released in May of 2022 and follows other works such as THE FEEDSTORE CHRONICLES, TWISTED ROADS, WAITING ON THE RIVER, and HEMINGWAY. Follow him on twitter @traviserwin